The upcoming Netflix flick showcases a unique comedic chemistry between the two actors.

Jamie Foxx and Dave Franco are hunting…vampires that is.

They star in Netflix’s newest film, “Day Shift,” and when theGrio caught up with the actors in Miami during the streamer’s promotional event they discussed its intense action and their artistic license with some bromance-like attaboys

On Friday, “Day Shift” drops on Netflix. J.J. Perry, a successful stuntman known for his work in the “John Wick” films, directs.

Foxx plays Bud Jablonski, a blue-collar man in Los Angeles who secretly kills vampires for money. The plot unfurls with Bud navigating a family crisis when his estranged wife (Meagan Good) and daughter (Zion Broadnax) consider a move to Florida when money gets too tight. The risk of that separation leads Bud to turn back to a vampire slaying union that kicked him out years prior.

With his union rep, Seth (Franco), Bud embarks on a fast-paced journey to prove himself to his family and the union. Meanwhile, Bud’s greatest threat – an incredibly dangerous vampire – grows more powerful in Los Angeles.

“Day Shift” offered the actors an abundance of opportunities for intense stunts and comedy, but each agreed their partnership was the most exciting element. 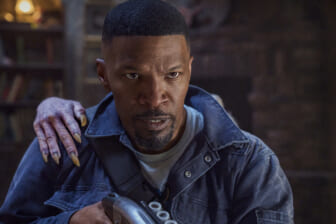 “I said since the beginning, ‘I’m not gonna do this movie unless Dave Franco is in this movie,'” Foxx continued. “I’ve been watching this man kill everything he does…and so this movie was perfect because it was him. His character Seth was, to me, watching sort of the evolution of Dave in all of his movies.” He quipped, “You get to see him flex his muscle in a way where I was like a proud father.”

Franco had just as much praise for Foxx. “Jamie gave me permission to just go nuts early on,” he explained when detailing the improvisational nature of the shoot. “Jamie from the get-go was like, ‘Do whatever you want! Go for it, let’s have fun!’ And when you’re working with someone just as funny and talented as Jamie, he just makes it easy.”

In a strong compliment, Foxx likened Franco’s acting process to the late Robin Williams’, in that Franco would make several choices on lines, never repeating the same acting beats. “It was an embarrassment of riches as far as what line to choose that he landed,” Foxx explained. “And that’s golden!”