Lori Harvey, in an ‘Under God, Over You’ hat, talks red dating flags and almost marrying young

The SKN founder has a history of dating high-profile men in the entertainment industry.

The intimate conversation comes two months after reports that the socialite split from actor Michael B. Jordan following about a year and a half of dating, theGrio reported. During her candid chat with Taylor, Harvey said change is “the beautiful part of growth,” and noted that at age 25, she is not the same woman she was at age 21, PEOPLE reports.

“Two different mindsets. Like, I don’t even know her anymore,” said Harvey of the younger version of herself. 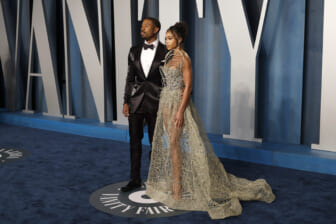 Also Read:
Report: Lori Harvey, Michael B. Jordan broke up. Neither said a word, but she did go to France alone

The SKN founder has a history of dating high-profile men in the entertainment industry, including rapper Future, hip-hop mogul Sean ‘Diddy’ Combs. She also was romantically linked to Akon’s brother Abou ‘Bu’ Thiam.

Harvey and Jordan went public with their relationship in January 2021. During an appearance on “The Real” in September 2021, Harvey said she and Jordan “balance each other.”

In December 2021, Jordan told The Hollywood Reporter that he “finally found what love was.”

After their split, a source close to the former couple told PEOPLE that Harvey “wasn’t ready to commit,” noting that she “realized that they weren’t on the same page.”

Harvey explained to Taylor that she wouldn’t change her past because she “learned so much in the process.”

“You can’t live your life based on what other people are going to think, how other people feel, because at the end of the day it’s your life — so what’s going to make you happy?” Harvey asked.

She went on to explain that her “values” and “standards” are what make her feel powerful in a relationship.

“There are some superficial requirements, and you can cut down on those … but don’t compromise on core values and beliefs,” she said.

“Don’t give your power away to anybody,” Harvey added. “That, I feel, is the key to being truly happy in or out of a relationship.”