‘Raising Kanan’ returns, and cast members reveal what they have to prove

TheGrio caught up with the cast of the successful Starz series ahead of its Season 2 premiere.

The wait is almost over for the highly anticipated Season 2 return of 50 Cents’ “Power Book III: Raising Kanan.” Like last year, the series has already been greenlit for the next season ahead of the premiere of the impending season. In this case, Season 3 has been announced and Season 2 has yet to begin airing.

TheGrio caught up with the ensemble to talk about Season 1’s cliffhangers and what is at stake for their characters in the new season.

Throughout last season, fans were taken on the journey of the evolution of Kanan, who on Starz’s “Power” was originally played by 50 Cent. However, in this show, fans of the “Power” universe were introduced to the younger innocent Kanan (Mekai Curtis), who was born into a situation where he would grow up and make decisions that would later align with the actions of the older Kanan. At the end of the season, viewers got a peek at that switch when he attempted to murder Det. Howard (Omar Epps).

Curtis opened up about the season finale and how Kanan will be different in Season 2. “In the second season, he is really just trying to figure out, ‘Who Am I?’ and that I will be able to move forward and do these things,” he explained. “So he is asking questions, and he is seeking answers that he wasn’t getting before. To help him piece together this bigger picture that has been hazy to him up until now.” 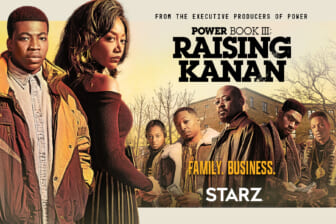 Miller’s work as the head of household and queenpin has garnered rave reviews from fans, but on camera, she has her share of enemies. Unique (Joey Bada$$) returns this season as a former kingpin and rival. The actor and rapper addressed his character’s arrest during the season finale and the challenges his character faces this season.

“This season is definitely an uphill battle for Unique. He lost it all, falsely accused of attempting to murder a police officer. And even when he gets out it’s like, ‘How he get out?’ And that’s another battle; people think you are snitching. It’s definitely going to be a struggle — a power struggle for Unique this season,” he said.

Unique’s false arrest was tied to probably one of the biggest cliffhangers of the season, which was the attempted murder of Det. Howard, who not only served as the old-school detective but could potentially be the father of Kanan. “That’s what’s going to be fun about Season 2 for the audience,” Epps explained. “He is figuring it out in real time, as they are. What is this? How do you do this? Is this real? He also doesn’t trust it because he knows Raq, and Raq is a master chess player.”

Last season, fans were given a taste of Kanan’s cousin Jukebox’s (Hailey Kilgore) musical abilities but expect to hear more music from Jukebox and Raq’s younger brother, Lou Lou (Malcolm Mays). Mays said his biggest hurdle is battling his passion for music and the family business. “He has to prove to Raq that he can run a business and handle their business but mostly to himself that he can do this sh*t.”

The stakes are even higher this season as the characters battle to prove themselves in their own way. Showrunner and writer Sashca Penn spoke about who he believes has the most to prove — none other than Kanan.

“What’s starting to happen with Kanan is that he is starting to separate from his mother. I think he is starting to realize things about his mother and come to a realization about himself along the way,” Penn disclosed, noting that this is a common occurrence among adolescents as they try to carve out their own path, a development that viewers will begin to see unfold this season.

The Season 2 premiere of “Power Book III: Raising Kanan” will air at 10 p.m. ET on Sunday on Starz and the Starz app.