In a joint statement, Iyanna McNeely and Jarrette Jones of “Love is Blind” have announced their split, officially sharing their plans to divorce after tying the knot on the season finale that aired earlier this year. 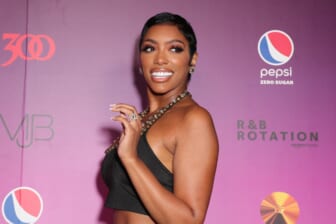 The couple, who celebrated their first anniversary in June, took to Instagram with their statement on Wednesday, sharing the news with their thousands of followers, whom they refer to as “family.” They wrote in the post that they had given the decision much thought and now “have separated and will begin the process of divorcing.”

“While we have love for each other, our lives are going in different directions, and that’s okay,” the statement reads. “Coming to this decision was far from easy and we will always wish each other the absolute best.” They then asked that their fans give them space as they “close this chapter” of their lives. “Thank you to our close friends and family for loving us both through our experience. To the Love Is Blind family and Netflix, thank you for this unforgettable opportunity and support. Each of you have brought overwhelming love and joy into our lives.”

“This experience has taught us so much about ourselves, vulnerability and love,” the statement concludes. “We don’t regret a single thing!”

Fans, of course, may remember the two from this year’s second season of “Love is Blind,” Netflix’s hit reality dating show that connects partners in separate “pods.” With audio only, eligible bachelors and bachelorettes strike up conversations with their potential matches in an experiment designed to prove whether love is truly blind. As reported in People, while Jones had a connection with another contestant, Mallory Zapata, he wound up choosing McNeely and the pair got engaged.

The couple seems to be getting plenty of support and love from fans and followers regarding the decision to go their separate ways. Even the official “Love is Blind” account wished them nothing but the best with a social media post that reads: “Jarrette and Iyanna – As you start the next chapters of your lives, thank you for opening your hearts to the Love is Blind experience and sharing your journey with all of us.”

“Love is Blind” fans have plenty of content to look forward to. Earlier this year, the series was renewed through Season 5 on the streamer, with the third season set to begin this year on a still unannounced air date.