The reality TV star opened up in a therapy session in last night's episode about surviving genital mutilation.

Last night’s episode of “The Real Housewives of Dubai” was an emotional one. In an incredibly powerful scene, Chanel Ayan revealed that at 5-years-old she underwent genital mutilation. An older sister did, too.

The newest city in The Real Housewives franchise, which has taken viewers into the lavish world of the six women on the show, is wrapping up its inaugural season. Kenyan-born, Somali and Ethiopian supermodel Chanel Ayan has been a series standout, delivering on the fashion front and nailing shady comments that have made her a fan-favorite. In the latest episode, however, Ayan opened up in new ways, PEOPLE is reporting.

In the very personal and revealing scene, fellow housewife Sara Al Madani takes Ayan to a hypnotherapy session. “If it could help her, maybe it could help me too,” Ayan explained in a confessional. During the session, Ayan began to open up old wounds from her childhood, an aspect of her life she has touched on throughout the season. Born in a small village, Ayan has disclosed that she has had certain traumas from this time that she has “blocked out.”

“When I was born until I was 5, I remember living with my mom and my dad, and my brothers and my sisters,” she explained, adding that she also remembers seeing her mother cry. “The crying, the sadness, the beatings … that’s what I remember. A lot of pain.”

While discussing her childhood from 5 to 12, Ayan shared the story about her and her sister. “At 5-years-old, my aunt and my grandma came to pick us up to take us to another town … and then the next morning at 6 a.m., I didn’t know where I was going whatsoever and then they took us to this man’s house and they just tied us on the bed and we were circumcised.” 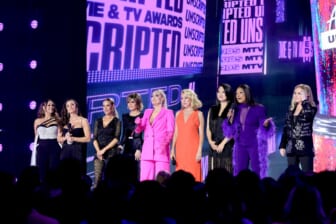 Through tears, she explained that she, “didn’t know what it was about … I was circumcised, we were tied in the legs. Couldn’t pee. Couldn’t move. When we wanted to pee they would carry us and put us on the grass. I just didn’t understand what the hell was going on whatsoever and my mom didn’t know that that was happening to us.”

In her confessional, Ayan shared even more details about the inhumane practice. “I’ve tried to understand it, I’ve tried to learn about it … it’s because we need to be a virgin when we get married so that our families can get our, like dowry … that’s some f-cked up shit.”

She added, “The reason that I’m talking about it is to bring awareness to it and I want people to understand this happens every single day, and if that’s my mission, maybe that’s what I should be doing.”

The season finale of “The Real Housewives of Dubai” airs at 9 p.m. ET on Wednesday, Aug. 24 on Bravo.