Man gets life, plus 375 years, for killing Georgia officer

Detective Terrence Green was shot in the back of the head as he ran for cover and died at Grady Hospital.

A man who shot and killed a Georgia police officer in 2015 has been sentenced to life in prison plus 375 years.

Superior Court Judge Jane Barwick sentenced Amanuel Menghesha on Friday in the death of Detective Terrence Green, a 22-year veteran of the Fulton County Police Department. Green and other officers were responding to reports of shots fired inside a house and domestic disturbance early March 4, 2015, when they were fired upon with an AK-47 by Menghesha.

Green was shot in the back of the head as he ran for cover and died at Grady Hospital, authorities said.

Menghesha, who was shot multiple times before his arrest, pleaded guilty to 33 counts including murder, criminal attempt to commit murder and aggravated assault against a peace officer. 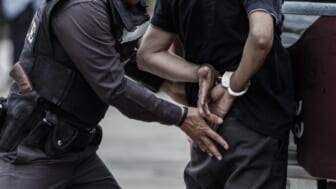 “While we cannot bring back Detective Green, we hope this guilty plea and sentence brings relief and a sense of justice to his family, friends and colleagues,” said Fulton County District Attorney Fani Willis in a statement.

South Fulton Police Chief Keith Meadows told The Atlanta Journal-Constitution that the court’s sentence “makes it clear that attacks on our law enforcement officers have no place in our state.”

“We want to wrap our arms around Detective Green’s family and pray that they and all officers involved are finally able to find some comfort and healing with this conviction,” the Fulton County Police Department said in a statement.