A federal indictment unsealed last month in Tampa, Florida, alleges the Black Hammer Party is involved in an effort by a Russian citizen with Kremlin connections to sow discord in the United States.

A Georgia-based Black separatist group is being investigated by federal and local authorities for a range of possible criminal offenses including drug and gun offenses, kidnapping and human trafficking, a detective testified Tuesday in a court hearing in suburban Atlanta.

The Atlanta Journal-Constitution reports Fayetteville Police investigator Diana Snider testified in magistrate court that she began investigating the Black Hammer Party after the group moved its headquarters to the town south of Atlanta. She said she was contacted by the FBI, which she said is also investigating.

Two members of the group have been charged with felonies relating to an alleged kidnapping and sexual assault in July at the house the group rents in Fayetteville.

A federal indictment unsealed last month in Tampa, Florida, alleges the group is involved in an effort by a Russian citizen with Kremlin connections to sow discord in the United States by paying fringe groups to make political protests. The indictment includes groups in Florida and California, as well as the Black Hammer Party, as unindicted co-conspirators to the plot.

Snider said federal agents have been watching the group’s attempts to recruit and arm homeless men as a security force and to aggressively solicit college students for donations at a downtown Atlanta park. 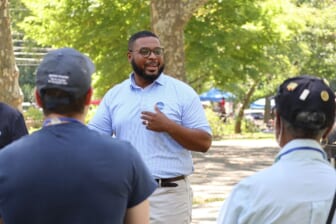 No criminal charges have been brought regarding those activities, the newspaper reported that Snider testified. Tuesday’s hearing relates to a July 19 call to police from a person who claimed he was kidnapped and held at gunpoint in a locked garage at the Fayetteville house.

Romain was also charged with forcible sodomy. Snider testified that Romain required group members to have sex with him to advance within the Black Hammer Party.

Defense attorneys for Romain and Rushin on Tuesday questioned the information underlying the arrests and asked how a political party qualifies as a street gang. The group claims it’s being targeted by federal authorities for political activities.

The alleged victim of the sexual assault declined to speak to police at the time of the arrests and the alleged kidnapping victim who called police is homeless.

“This entire case appears to arise on the statement of one person,” said Stacey Flynn, the lawyer for Romain, referring to the man who called police.

Fayetteville detective Justin Taylor said the man told police he and another Black Hammer recruit had been forced into a locked garage and held at gunpoint when the victim refused Romain’s order that everyone go to bed at 8 p.m. because the group had a protest the next morning. Taylor testified Romain and another Black Hammer member, 18-year-old Amonte “AP” Adams, held guns.

Adams was found inside the house when police raided, dead of from what police said appeared to be a self-inflicted gunshot wound. The Black Hammer Party has, without evidence, accused police of shooting Adams. Taylor said an autopsy of the man has been completed, but a report is not yet available.

Snider said police and the FBI are investigating three other kidnappings that are alleged to have occurred in the house.