A dead body found in a Martha’s Vineyard pond this week has been identified as the second of two Jamaican brothers who died jumping off of a bridge from the movie “Jaws,” Massachusetts State Police said.

The agency on Thursday reported that a shell fisherman found the body of 21-year-old Tavaughn Bulgin near Sengekontacket Pond, concluding a week-long search following the bridge jump that also killed his older brother, 26-year-old Tavaris Bulgin.

“We extend our deepest condolences to the Bulgin family upon the devasting loss of these two young men,” wrote the agency, which reported in an earlier update that Tavaris’ body was found on Monday, Aug. 15.

As previously reported by theGrio, the bridge that they jumped from, the American Legion Memorial Bridge, sometimes called “Big Bridge” by locals, has been a popular tourist attraction popularized by the 1973 film, “Jaws.”

It is illegal to jump from it, however, jumping into the water from the bridge has been a tradition enjoyed by tourists and locals alike “for decades,” MSP reported.

Adam Sansoucie, a spokesperson for U.S. Coast Guard Station Woods Hole, said that a concerned person called 911 on Sunday, Aug. 14 regarding the swimmers. “One was seen about 200 feet offshore going under the water and not resurfacing,” Sansoucie said.

According to Boston.com, the water under the bridge — which separates Nantucket Sound from Sengekontacket Pond — is approximately 15 feet deep, and depending on the tide, there can be an undercurrent. 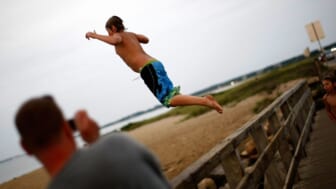 The Bulgins were reportedly in Martha’s Vineyard for the summer working a seasonal role at a restaurant, according to MSP.

“It doesn’t seem real,” Marsha Green, friend of the brothers and their family, told NBC Boston. “It was really a surreal thing to hear.”

Green said that the parents of the Bulgin brothers “are in absolute shock” and had to be hospitalized in Jamaica upon receiving news of the tragedy.

She added that the brothers were not drinking alcohol during the outing and were simply wanting “to have a good time.”