During interviews with theGrio, Jones and Bowman reflect on what they’ve achieved in their first terms in the U.S. House and why they believe they should be elected to serve another two years.

On Tuesday, New York voters will decide their party nominees to head into the November midterm elections. Two races closely followed by theGrio are the primary contests for New York’s 10th and 16th Districts, where sitting Black progressive members of Congress, U.S. Reps. Mondaire Jones and Jamaal Bowman are battling to keep their seats in the U.S. House of Representatives.

Bowman and Jones were elected in 2020 after taking on long-serving, veteran (and moderate) Democrats in their districts. Since being elected to Congress, the liberal politicians have made a name for themselves as leading, young, progressive, Black voices in Congress, championing various issues from student debt cancellation to expanding the Supreme Court.

But this primary season has shown to be a test of strength for the progressive lawmakers, as Jones—who made history as the first openly gay Black man elected to Congress—and Bowman confront competitive races against more moderate candidates. While both district races are very different in nature and constituency, their outcomes will undoubtedly have consequences for Black (and Black LGBTQ+) representation in Washington and policy issues important to Black and brown communities.

In separate interviews with theGrio, both Jones and Bowman reflected on what they’ve achieved in their first terms in Congress and why they believe they should be elected to serve another two years. 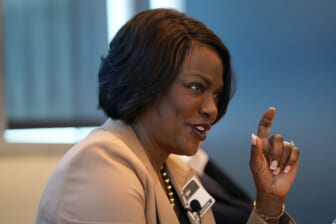 Also Read:
What to watch: Top Democrats square off in Florida, New York

Congressman Jones’ race in New York’s 10th Congressional District is undoubtedly the most competitive Democratic primary in the state, and arguably across the country.

The 35-year-old politician had a windy journey this election season, having first been challenged in his current 17th Congressional District by fellow Democrat Rep. Sean Patrick Maloney, following a court-ordered redrawing of the state congressional map. Maloney, the chair of the Democratic Congressional Campaign Committee (DCCC)—which is tasked with the job of electing more Democrats in the House—was lambasted by Democrats, including Rep. Alexandria Ocasio-Cortez (AOC), for challenging Jones, a sitting Democrat in Congress.

Criticisms online also revealed outrage over the racial implications of a white man in leadership running to unseat the nation’s first openly gay Black congressman. Jones ultimately decided not to run for reelection in his district against Maloney. Another option was running against Bowman, a fellow progressive, in the 16th District, but ultimately, he decided to run for a solid Democratic 10th District seat in New York City.

Jones has raised over $3 million throughout his campaign and spent considerably on TV ads in the city emphasizing his connection to the district’s historical LGBTQ+ roots, and his educational and professional rise despite being raised by a single mother while living on Section 8 housing and food stamps. He’s also touted his legislative work as a “progressive champion.”

“I’m the only member of Congress in this race and a leading progressive who has delivered results for New York’s 10th District already when it comes to billions of dollars for schools, housing, health care and infrastructure,” Jones told theGrio, pointing to laws he’s voted for in Congress, including the American Rescue Plan and Infrastructure Investments and Jobs Act.

The New York Democrat said he is “uniquely prepared to meet this moment,” adding, “I’m doing battle with Republicans even while pushing Democrats to fight harder for the things that we say we believe in.”

Jones, who was once named the most active freshman in Congress, said he’s proud of his role as a “bridge builder” and negotiator between progressives like him and “conservative” Democrats. But Jones could potentially be ousted from Congress as polls have indicated that moderate candidate, Daniel Goldman, a multimillionaire and Levis Strauss heir, holds a consistent lead in the crowded race among polled voters in the district.

Jones and his other opponents in the race have taken aim at Goldman, accusing him of buying the congressional seat as he has reportedly invested $4 million of his own money into the campaign. Goldman also received endorsements from the New York Times (despite also praising Jones), and shockingly, from former President Donald Trump. 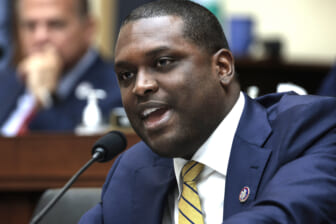 “Mr. Trump’s endorsement of Dan Goldman tracks,” Jones said of Goldman, who he criticized for his investments in Fox News, his support for abortion restrictions and opposing “prominent progressive legislation” like Medicare for All and the Green New Deal.

“It makes sense to me that Mr. Trump would think Dan Goldman is best positioned to defeat progressives in this race, which is what he said in his endorsement,” he said.

“Mr. Goldman is an out-of-touch multimillionaire who lives in a $22 million condo,” Jones added.“This is not someone who represents the values of this deeply progressive district.”

Recognizing the high stakes of this race, Jones told theGrio “to lose me in the House would be a blow to our democracy and the fight to protect fundamental rights.

“I have been a leading progressive member of Congress, who has brought the rest of the Democratic caucus with him on issues like Supreme Court expansion, and voting rights and democracy reforms,” he explained.

Bowman, “member of the Squad,” fights to be reelected in the 16th Congressional District

Jamaal Bowman, a former school principal turned politician, has quickly raised his public profile as the only male member of the progressive collective of lawmakers known as “The Squad”—which includes AOC and Reps. Ayanna Pressley, Cori Bush, Ilhan Omar and Rashida Tlaib.

Similar to Jones, Bowman’s race has been shaped by redistricting. The congressman, who represents parts of the Bronx, had a significant number of Black residents drawn out of the 16th Congressional District.

Rep. Bowman’s moderate opponents have taken aim at his more liberal stances like defunding the police and his voting against the bipartisan infrastructure law that he and members of the Squad boycotted in an effort to save another major Democratic bill known as Build Back Better.

“Yes, I am a progressive. Yes, I am a member of ‘the Squad,’ if you will,” said Bowman, but also  emphasized his endorsements by Democratic Party leadership in House Speaker Nancy Pelosi and Senate Majority Leader Chuck Schumer.

“It’s not as much about whether you call yourself progressive or moderate or conservative. It’s more about how you show up and how you get the job done.”

Bowman said he believes voters are motivated by good leadership, not any particular faction or ideology within a party. “I know in my district, we continue to get a very high level of support, because people believe and feel—and I agree with them—that we’ve been able to meet their needs over these last couple of years.” 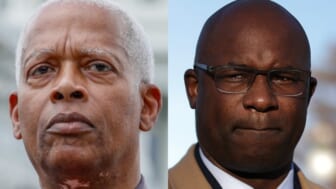 He added, “It’s about servant leadership and compassionate leadership, and it’s about showing up for your district and speaking truth to power on the issues that matter most to them.”

Rep. Bowman touted his and his staff’s work on both the national and local level, from closing more than 3,000 cases of interventions with federal agencies like the IRS for his constituents, writing proposals for community project funding and helping constituents refinance their mortgages, including access to millions of dollars for home repairs. In total, he said he’s helped his constituents save roughly $3 million.

Bowman also pointed out that he’s introduced around 45 pieces of legislation, and his office’s writing of a resolution condemning the racist ideology known as “the great replacement theory,” which was passed in the House. The congressman said he was also proud to have Sen. Elizabeth Warren (D-Mass.) as the Senate lead on his “Care for All” resolution that “centers care as part of the rebirth of the American economy.”

Can Democrats keep power in Congress?

As Reps. Jones and Bowman hope to come out victorious in their respective primary races, Democrats in Washington are hoping their legislative accomplishments over the past two years—including the most recent Inflation Reduction Act signed into law by President Joe Biden—can be enough to hold on to power in Congress to continue the Biden-Harris agenda for the next two years. Both congressmen expressed faith in the party’s ability to win over voters in the November elections less than 90 days away.

“We have a lot to celebrate,” Bowman told theGrio. “We should be on the upswing and we have to make sure we’re communicating clearly, consistently, concisely and effectively, so that the American people can know what we’ve done and get on board with what we need to do.”

Jones said that Democrats in the Senate have a “very good chance” of holding or even growing their majority, pointing to “how well our candidates in Pennsylvania, Wisconsin, and Ohio are doing. “With respect to the House,” he said, “we are at a systemic disadvantage due to partisan gerrymandering in red states in this country.”

The congressman continued, “We can still keep the House, but it means we’ve got to message well the accomplishments that we’ve had over this term and convince Americans that we will build on those accomplishments if they return us to power.”