During the weekend, the former NBA player reportedly told a news outlet he was going "to Russia to help that girl."

Just two days after former NBA player Dennis Rodman told a news outlet that he was going abroad because he “got permission to go to Russia to help that girl,” he said the trip would not happen.

He reversed course soon after the U.S. State Department announced that Rodman’s trip would not be on behalf of the United States.

NBC News reported Saturday that Rodman, while in a Washington, D.C., restaurant, made the statement to the media outlet about his planned travel to seek the release of WNBA player Brittney Griner.

Monday, the U.S. government cautioned Rodman not to interfere in the Griner case, according to ABC News.

Ned Price, a State Department spokesperson, told ABC News during a press briefing that if Rodman did go to Russia “he would not be traveling on behalf of the U.S. government.”

He added, “We believe that anything other than negotiating further through the established channel is likely to complicate and hinder those release efforts.”

Price added that the State Department has “provided very clear guidance to American citizens — owing to a number of threats, not the least of which is the threat of wrongful detention — that Americans should not travel to Russia. That has been our message to private Americans across the board,” ABC reported. 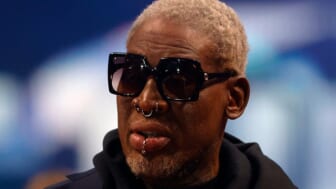 The department currently has a “Level 4-Do Not Travel” advisory in place regarding Russia due to the nation’s conflict with Ukraine. Griner was convicted of drug charges earlier this month in Russia and sentenced to nine years in prison. The Biden administration has classified Griner as being “wrongfully detained” in Russia.

Last month, U.S. Secretary of State Antony Blinken told reporters that he has spoken to Sergey Lavrov, Russia’s ​​foreign minister, to discuss securing the return of Griner to the U.S. in exchange for Viktor Bout, a convicted arms dealer. American Paul Whelan, who has been detained in Russia since 2018, would also be a part of that swap, ABC reported.

Price noted that “those discussions are ongoing.”

Rodman has previously informally inserted himself in international affairs with North Korea. The former player had an amicable relationship with North Korean leader Kim Jong Un during the past decade, making multiple visits to the country. Rodman traveled to Moscow in 2014, and after that trip described Russian President Vladimir Putin as “cool.”