The incident occurred in June 2020 after Wendy's employees called police to report a person was asleep in a car in the restaurant's drive-thru lane.

The two Atlanta police officers involved in the fatal shooting of Rayshard Brooks at a Wendy’s more than two years ago will not face charges, special prosecutor Pete Skandalakis announced at a news conference Tuesday, according to The Atlanta Journal-Constitution.

As reported previously by theGrio, the incident occurred in June 2020, when police responded to a call and found Brooks sleeping in his car in a Wendy’s drive-thru. Brooks consented to a breathalyzer test that indicated he exceeded the legal alcohol limit to drive.

During the news conference, Skandalakis delivered a frame-by-frame recap of the police body cam video showing the events leading to the fatal shooting. Former Gwinnett County District Attorney Danny Porter reviewed the case and video at the request of the special prosecutor. He spoke at the press conference and said “video never lies, but sometimes it doesn’t tell the truth.”

When officers Garrett Rolfe and Devin Brosnan attempted to handcuff and arrest Brooks, he tried to run away after grabbing Brosnan’s Taser, authorities said. Brooks fired the Taser at Rolfe, who responded to the stun weapon by using lethal force — firing his weapon three times, killing the married father of four.​​ The killing sparked protests at the Wendy’s location, with demonstrators burning it to the ground a day after the shooting.

Rolfe initially faced 11 charges, including felony murder, while Brosnan faced charges of aggravated assault and violating the oath of office. Both Rolfe and Brosnan remain employed by and on administrative duty for the Atlanta Police Department, the Atlanta newspaper reports. 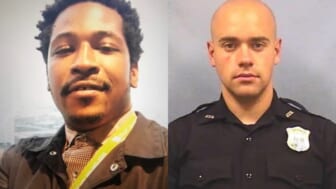 “Based on the facts and circumstances confronting Officer Rolfe and Officer Brosnan in this case, it is my conclusion the use of deadly force was objectively reasonable and that they did not act with criminal intent,” said Skandalakis, executive director of the Prosecuting Attorneys’ Council of Georgia, during an afternoon news conference.

Porter added, “Initially with the video, it looked one way. But it became very clear … that a different incident happened than has been released both by former prosecutors and by other sources.”

Skandalakis said people should not compare Brooks’ death to the police killing of George Floyd.

“This is not a case in which an officer was kneeling on a prone suspect for nine minutes. It’s nothing like that. Nor is it like the Ahmaud Arbery case, where armed citizens were chasing a person down through a neighborhood,” Skandalakis said. “This case, its facts, are different. Its facts are distinct. But you can’t ignore the fact that all of this was happening about the same time.”

In a statement, Brosnan’s lawyers described Skandalakis’ announcement as “the right decision,” The Atlanta Journal-Constitution reported.

“Officer Brosnan’s arrest was never supported by any evidence,” the statement said, noting that the officer suffered a concussion during his scuffle with Brooks. “Despite his own injuries, he called for and personally rendered aid to Mr. Brooks after the shooting. At no point did he assault or abuse Mr. Brooks.” 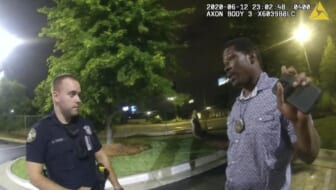 Atlanta City Councilman Antonio Lewis, who represents the district where Brooks was killed, also issued a statement, the paper reported. “Seeing the charges dismissed truly pains me,” it read.

“Rayshard Brooks was asleep at the wheel in a drive-thru line. That’s all,” Lewis said. “I understand the need for accountability, but he didn’t have to lose his life. This shooting happened in my district, and the community still feels the hurt and the devastation from it.”

Brooks’ wife, Tomeka Miller, is suing the City of Atlanta and the officers involved in his death.