The widow of 27-year-old Rayshard Brooks, the man who was fatally shot after an interaction with two Atlanta police officers, is suing the City of Atlanta and the officers for his death.

During the incident in June 2020, the police were called when Brooks was found sleeping in his car in a Wendy’s drive-thru. Once the police arrived, they performed a breathalyzer test on Brooks and found that he was over the legal limit to drive.

When they tried to handcuff Brooks, he tried to run away after grabbing an officer’s taser. Brooks fired the taser at officer Garrett Rolfe, who then fired his weapon three times killing the married father of four.​​

His wife, Tomeka Miller, said that the shooting was “senseless and unjustified” in the lawsuit on behalf of Brook’s estate. In addition, the lawsuit states that the officers didn’t provide the necessary medical attention that Brooks needed.

Devin Brosnan, the other officer involved, was also named in the lawsuit because Miller said he threatened Brooks with a taser without completing a mandatory Taser certification course which the department requires.

The lawsuit also implicated the City of Atlanta for failure to enforce that its police department adhere to the adequate training, and lack of supervision of its officers. 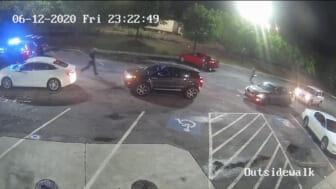 The video recording of Brooks’ death made headlines when it was first released in mid-June 2020.

Through several videos captured by body-cam footage from the officers, a Wendy’s restaurant surveillance camera, bystander videos and the police vehicle dash-cam — the full 41-minute altercation between Brooks and the officers can be seen from the moment they arrived at 10:42 p.m., until his death less than an hour later.

At first, the interactions were calm, with police questioning Brooks and administering a sobriety test.

Once the police moved to arrest the father, Brooks hit an officer while grabbing the other’s taser and a short chase ensued. Rolfe was seen reaching for his 9-millimeter Glock handgun as Brooks turned and discharged the taser again.

Rolfe then shot three times, striking Brooks twice in the back.

The two officers then walked over to Brooks, who was still moving and waited another two minutes to provide medical assistance. Six minutes later, an ambulance arrived and took eight minutes to arrive at a hospital where Brooks died shortly after.

The chilling video sparked outrage, adding to the already growing public outcry to end police brutality after the murder of George Floyd which happened just two months prior to Brooks’ death.

A day later, Rolfe was dismissed from the force and was later charged with felony murder along with five counts of aggravated assault, four counts of violation of oath of office and one count of criminal property damage. Brosnan was put on administrative leave.

The decision to fire Rolfe, however, was reversed nearly a year later after the Atlanta Civil Service Board found that Rolfe’s firing was “not done in accordance with the Atlanta City Code.”

“Due to the City’s failure to comply with several provisions of the Code and the information received during witnesses’ testimony, the Board concludes the Appellant was not afforded his right to due process,” said the board in the decision about Rolfe in late May 2021. “Therefore, the Board grants the Appeal of Garrett Rolfe and revokes his dismissal as an employee of the APD.” 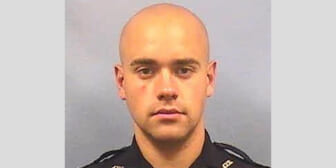 Rolfe remains on administrative leave and the criminal charges against him still remain.

Miller claims that Rolfe acted with malicious intent to use deadly and excessive force to hurt her late husband and states that both officers acted with deliberate indifference by delaying medical aid after shooting him.

The damages she is going after are unspecified.