Elba and his co-star, Tilda Swinton, constructed a strong chemistry and connection while passing glasses of wine across socially distanced balconies.

Idris Elba is currently one of the most in-demand actors in Hollywood, seemingly taking his craft to new levels with each character he portrays. Today’s release of George Miller’s “Three Thousand Years of Longing” displays this Golden Globe-winning actor’s range as he takes on the role of a Djinn (Genie).

Elba stars alongside Oscar-winning actress Tilda Swinton (Alithea Binnie) as they tell a story of love and fantasy. TheGrio caught up with the two to discuss what they built upon to tell this story and how they shot a film under strict covid protocols.

“I’ve been in love and wanted love and didn’t get it the same way I would hope for,” Elba said. “That was something I could relate to in terms of my character, longing.” Elba shared that he used previous emotions from failed relationships to really connect with his character and the desire for love.

Storytelling and pulling from past relationships played essential roles in the longing of these two characters, however, Swinton also opened up about how the film itself taught her how much opposites can truly connect and use the past to grow together.

“The film has encouraged me to know that people who are very very different can truly love each other,” she said. “And sometimes that real difference and relating of that long story of their long life and realizing you weren’t there for it, it’s their path, but then the joining and going off on one trajectory.”

The basis of the film, two loves longing to be together, and the title, “Three Thousand Years of Longing,” served as a bit of irony for the two veteran actors, as they had to spend two weeks in quarantine before shooting the film.

While in quarantine, the two would spend hours on the balcony reading scripts and developing their chemistry. “Our balconies were next door to each other, and there was a gap which was just enough for Idris’ very long arm and my less long arm to pass a glass of wine over,” Swinton recounted. “It was a very beautiful memory.” 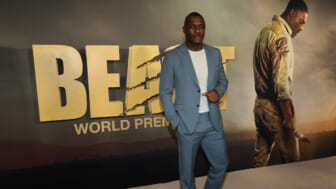 Also Read:
Idris Elba on playing a relatable dad in ‘Beast’: ‘How bad can you be?’

Elba viewed that experience in quarantine as valuable for the story.

“It was actually a very useful time. We would spend maybe eight hours a day on Zoom even though we were next to each other, talking through the script with [director] George, every word, every syllable.”

Those hours spent on Zoom were definitely beneficial; Elba’s character’s storytelling captures the audience from the moment he takes the screen. The magical journey of love and the hurdles that pop up officially hits theaters worldwide Aug. 24, 2022.