Don’t hold your breath for more Finn in the “Star Wars” franchise, at least as played by John Boyega. In a recent interview, the actor opened up about whether or not he would ever return to the galaxy “far, far away,” saying, “I’m good off it.”

While the sequel trilogy was a financial success, it opened up the floodgates for a specific type of racist hate currently seen in fanboy culture, especially with the rise of social media. Actors of color like Boyega, Kelly Marie Tran and more faced relentless attacks online and did not necessarily feel protected from the attacks as they happened. While Boyega has been vocal about his experience with the films and Disney, in a recent interview he updated fans on exactly where he’s at with the franchise, and why he doesn’t see himself returning.

He explained on the SiriusXM show “Tell Me Everything with John Fugelsang,” “At this point, I’m cool off it. I’m good off it. I think Finn is at a good confirmation point where you can just enjoy him in other things, the games, the animation. But I feel like ‘[Episode] VII’ to ‘[Episode] IX’ was good for me.”

Not returning to the series is also a creative decision, as the actor has been able to expand far beyond the sci-fi genre and collaborate with other actors in recent projects. “To be fair, the allies that I’ve found within Joel Taylor and Jamie Foxx, Teyonah Parris, Viola Davis, all these people I’ve been working with… versatility is my path.” 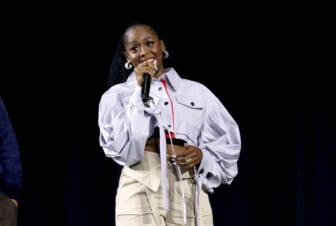 Boyega also touched upon Moses Ingram and her experience with the “Star Wars” fandom. As theGrio previously reported, the “Obi-Wan Kenobi” actress also endured racist attacks online just this year when the highly anticipated series debuted on Disney+. The studio this time, however, quickly supported the actress publicly, releasing a statement condemning fans who perpetuated hate. Costars like the series lead Ewan McGregor also came out in support of the actress. This show of solidarity, Boyega explained in the interview, makes him feel, “protected.”

“Moses Ingram being protected makes me feel protected, do you understand what I’m saying?” the actor said. “It makes me feel like, ‘Okay, cool. I am not the elephant in the room.’ Because when I started, it wasn’t really a conversation you could bring up. You know how they went through it. It was kind of like, let’s just be silent. It wasn’t a conversation you could bring up. But now to see how blatant it is, to see Ewan McGregor come and support… for me, [it] fulfills my time where I didn’t get the support.”

Watch a clip from the interview below: