“Game of Thrones” is back. The popular HBO franchise has returned with a prequel series, “House of the Dragon,” which takes place 200 years before the events of the original and chronicles the rise and fall of House Targaryen. The prequel is also a bit more diverse this time around, with Steve Toussaint joining the series as Lord Corlys.

While the Sunday night series has received much praise, like many fantasy franchises these days, there has been backlash from racist viewers regarding Toussaint’s involvement.

In a recent interview, the “House of the Dragon” star opened up about the racist criticism he has received, telling Men’s Health that his addition to the franchise “seems to be very hard for people to swallow.”

“They are happy with a dragon flying,” Toussaint said. “They’re happy with white hair and violet-colored eyes, but a rich Black guy? That’s beyond the pale.” Still, he explained, there are plenty of positive fans as well.

“It’s great that there are people excited,” added Toussaint. “What has been wonderful is for every toxic person that has somehow found their way into my timeline, there have been so many others who have been so supportive and been like, ‘Oh my god, I can’t wait, this is going to be great!’ Even when we were doing certain scenes, there would be supporting artists who would come up and go, ‘It’s great to have this representation.’

By the season premiere’s ratings, it seems “House of the Dragon” is a huge hit, despite those negative fans. Sunday night’s first episode drew nearly 10 million viewers per The Hollywood Reporter, making the prequel the biggest HBO premiere of all time. 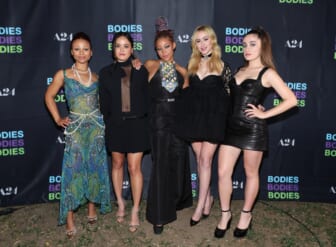 “It was wonderful to see millions of ‘Game of Thrones’ fans return with us to Westeros last night,” said Casey Bloys, HBO and HBO Max chief content officer, in a statement Monday. “‘House of the Dragon’ features an incredibly talented cast and crew who poured their heart and soul into the production, and we’re ecstatic with viewers’ positive response. We look forward to sharing with audiences what else George [R.R. Martin], Ryan [Condal] and Miguel [Sapochnik] have in store for them this season.”

In an upcoming episode of TheGrio’s “Acting Up” podcast, Cortney Wills sits down with “Game of Thrones” alum Nathalie Emmanuel, who played Missandei. In the episode, airing this weekend, she breaks down her time on the series and the importance of representation in these fantasy shows.