The woman claims that when the school year began last week, students returned to classrooms to see the bookshelves covered.

An Oklahoma teacher who provided her students with a method to access digital copies of books banned in the state has resigned from her posts, but there are different accounts of what led to her departure.

After sharing the code, the teacher says, school officials assigned a substitute teacher to her classroom, informed her that she would meet with the district’s assistant superintendent and placed her on administrative leave, Insider reported. The district disputes that account.

A new Oklahoma bill restricts how instructors can discuss gender identity and systemic racism in school. According to Insider, teachers at Norman must read every book in their classroom or provide “two professional sources” that confirm the “appropriateness” of the books. 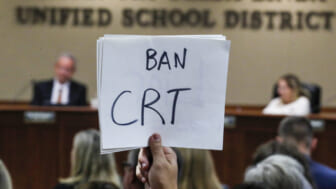 “They see that every single bookshelf is covered over and no books are visible and I answered that question that students had and I answered it honestly,” the teacher explained. The banned books center on LGBT+ and BIPOC communities that “many state leaders felt threatened by,” the teacher said.

Boismier responded to the hidden books by providing her students with the QR code.

To avoid uncertain backlash from the community or disciplinary action, some teachers have dismantled their classroom libraries.

Norman Public Schools spokesperson Wes Moody said in a statement that the teacher was not placed on leave for posting the QR code to access the list of free e-books of banned titles.

“The concern centered on a Norman Public Schools teacher who, during class time, made personal, political statements and used their classroom to make a political display expressing those opinions,” Moody said, as reported by KOSU.

Moody noted that while many teachers in the district have expressed concern  “regarding censorship and book removal by the Oklahoma state legislature,” the goal remains to “teach students to think critically, not to tell them what to think.”