Ben Jealous, president of People For the American Way, told theGrio he blames the stalled meeting on President Biden's “young" staff who "don't understand the importance of maintaining certain traditions.”

Fifty-nine years ago on Aug. 28, throngs of mostly Black people mobilized and convened in Washington, D.C. for the March on Washington to advocate for civil and economic rights for African Americans.

The hundreds of thousands of participants were captivated by the words of speakers like Dr. Martin Luther King Jr., who delivered his now famous “I Have A Dream” speech on the steps of the Lincoln Memorial. That speech, almost six decades later, is one of the most memorable and recited speeches of King, who during his life was vilified for his activism but is now celebrated as a martyr for racial equality.

Marking this year’s anniversary at Friday’s White House press briefing, Karine Jean-Pierre, press secretary and presidential spokesperson for President Joe Biden, told theGrio, “We can’t rest until justice truly rings out for all of us.”

This year, there will not be a ceremonial march at the Lincoln Memorial or on the National Mall as in years past on behalf of civil rights groups. Last year’s rallies in the nation’s capital did not yield the crowds anticipated by organizers amid the ongoing COVID-19 pandemic.

Civil rights leaders are instead planning a major event to mark next year’s 60th anniversary of the 1963 March on Washington for Jobs and Freedom, sources told theGrio. However, to mark this year’s commemoration, leaders hoped to meet with President Biden ahead of the anniversary. The plan was for an all-encompassing discussion between the president and civil rights leaders about many policy issues facing Black Americans today.

However, the hoped-for meeting with Biden did not take place. To date, there has only been one meeting between Black civil rights leaders and President Biden since he took office. However, leaders have had several meetings and discussions with White House staff over the past year and a half.

President Biden on Sunday commemorated the March on Washington anniversary in a statement highlighting his administration’s commitments to racial justice; including his past executive orders advancing equity and historic infrastructure investments in Black and underserved communities.

“This day reminds us of how far we’ve come, where we need to go, and how far and how much longer the journey is. And it reminds us that each of us must engage in the painstaking work of perfecting our union,” said Biden. “For Dr. Martin Luther King, Jr., for John Lewis, and for all those who have fought for a better America, we must march on.” 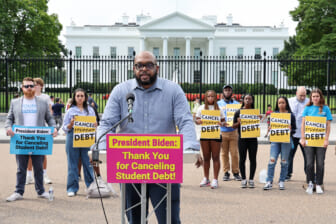 The anniversary of the March on Washington comes at a critical time for Black Americans, who have seen a bevy of restrictive voting laws erected in states across the country, and continue to struggle economically and experience violent and deadly encounters with police.

Earlier this year, theGrio spoke with Bernice King, CEO of The King Center and daughter of Martin Luther King, Jr. King’s youngest daughter said if her father were still alive, he’d be disappointed by the rollback of voting rights in the U.S. and federal inaction on the case for reparations for Black people.

During that interview, on what would’ve been our father’s 93rd birthday, King said, “I’m concerned we’ve lost our way as a nation. She added, “it is time for Black Americans to be elevated. We have been so mistreated as a race.”

King recalled her father’s remarks from the 1963 March on Washington, about the “bank of justice.” Speaking about the issue of reparations, she proclaimed, “it’s time for Black Americans to get our check.”

She added, “it will express itself in different ways; maybe some cash payment, but there might be some other provisions made in other areas.”

Speaking to the White House’s contact with the civil rights community, Jean-Pierre said, “we are in close touch with them. The president has a very good relationship with many of those leaders.” She added, “We find those relationships important [and] we will continue to grow.”

Ben Jealous, president of People For the American Way, told theGrio that he was surprised by President Biden not meeting with civil rights leaders before the March on Washington anniversary.

“I cannot believe that the president didn’t want to have the meeting. He knows well the importance of such tradition,” said Jealous.

Jealous continued, “Regardless, it’s important for all of us to take a moment this week, and each year, to just take stock about whether we’re moving forward or we’re moving backward.”

The former head of the NAACP blamed the meeting with President Biden not happening on “young people who work in the White House in positions of power, and yet don’t understand the importance of maintaining certain traditions.” Those traditions, he said, “help us ultimately move our country in the right direction.” 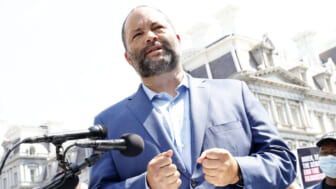 Also Read:
Civil rights leader Ben Jealous is on a mission to ensure Black men get out to vote in midterm elections

Jealous said a meeting with Biden is critical as many have warned that the U.S. is teetering toward a civil war post-Donald Trump’s presidency and amid rising white nationalist violence and terror.

“Many people are using the phrase looming civil war, or it feels like we’re on the edge of a civil war,” he said. “If that’s the case, then we all need to redouble our efforts to get back moving in the right direction, to lower the tensions, and to increase the peace, tranquility and justice in our society.”

A source close to the White House told theGrio that the meeting between the president and civil rights leaders did not happen because they had to change the time and that not enough of them could attend the meeting in person. The leaders declined to do the meeting virtually.

Even though the meeting between the White House and civil rights leaders did not happen, Jean-Pierre acknowledged during Friday’s press briefing that the March on Washington and King’s “I Have a Dream” speech “changed the course of history.”

“We continue to reaffirm our commitment to fulfilling America’s founding promise. And the president has made advancing equality core to his administration,” she said.

President Biden decided to run for president after witnessing the racism and deadly violence resulting from the 2017 “Unite the Right” rally in Charlottesville, Virginia.

“The hatred that we saw … that moved [Biden] and that moved so many of us,” said Jean-Pierre. “When dealing with racial equity, he [takes] that very seriously.”