The police chief said the 20-year-old man appeared to be holding a vape pen or electronic cigarette before he was shot.

Both the mayor and the police chief in Columbus, Ohio have vowed to perform a thorough investigation after a police officer shot and killed an unarmed Black man this week while attempting to arrest him on outstanding warrants.

The Columbus Dispatch reported that multiple police officers went to an apartment complex in the Hilltop neighborhood around 2 a.m. on Aug. 30 to arrest Donovan Lewis, 20. He was wanted on outstanding warrants for assault, domestic violence and felony improper handling of a firearm, as well as a misdemeanor assault on his girlfriend, who is pregnant with his child.

Body camera footage reportedly shows Officer Ricky Anderson, a 30-year veteran assigned to the canine unit, and other officers inside the apartment searching for Lewis with a K-9. Anderson comes around the corner from the living room area, holding the barking dog and opening a closet door.

Before Anderson pushed on a bedroom door, one of the policemen apparently verbally warned that they were about to send the dog in. One of the officers yells, “Hands!” as the door opened and the light from another officer’s gun shined on Lewis. The video captures Anderson reaching through the doorway and shooting Lewis in less than one second.

Columbus Chief of Police Elaine Bryant said during a press conference that it appeared Lewis was holding a vape pen or electronic cigarette before he was shot. The device is visible on the bed as officers put Lewis in handcuffs before escorting him out of the bedroom. He received medical attention and was transported to an area hospital where he died. 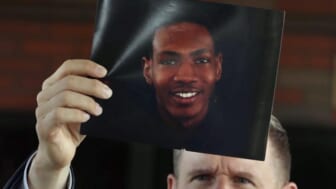 The Ohio Bureau of Criminal Investigation is leading the external investigation into the incident, which is city protocol for officer-involved shootings.

Columbus Mayor Andrew J. Ginther noted that the shooting — which marked the city’s third involving a police officer in eight days — “resulted in the tragic loss of life” and that “a mother has lost her son.”

“Transparency, accountability, cooperation — these are our bedrock values,” Ginther said, according to The Dispatch. “And [they] will inform every step forward. We ask for your patience and grace as we uncover all the facts.”

Bryant asked the public to trust the process and to wait for the finding of the BCI investigation, promising it would be thorough and free of bias.

“We’re committed to full transparency to sharing as much as we can as quickly as we are able do so — and we’re committed to holding officers accountable if there was any wrongdoing,” Bryant said, The Dispatch reported. “As the chief, it is my job to hold officers accountable, but it is also my job to offer them support and that I give that to them through the process.”