The actor, an alumnus of Yale School of Drama, took to social media with a funny post after the comments went viral.

In a recent profile, “Watchman” and “Candyman” leading man Yahya Abdul-Mateen II broke down his career thus far and how he chooses his projects, switching back and forth from serious dramatic projects like the “The Trial of the Chicago 7” to comic book movies like “Aquaman,” which he refers to as “clown work.”

Sitting down with Hunter Harris of Vulture for the profile, the actor mostly breaks down his upcoming role in “Topdog/Underdog,” a play set to make a splash on Broadway this year. Of course, the play written by Suzan-Lori Parks requires skills different from the ones he deploys for a movie like “Aquaman.” Discussing these differences in the profile, he explained, “Everything should be about getting to the truth. But sometimes you got to know which movie or genre you’re in.”

“Something like ‘Aquaman,‘ that’s clown work,” he continued. “‘Aquaman’ is not ‘The Trial of the Chicago 7.’ You gotta get over yourself,” he said. “In order to survive and to do it well, you have to play that game and then be crafty about when you want to surprise the audience, the director, or yourself with a little bit of ‘Wow, I didn’t expect to see a Chekhovian thing or August Wilson and ‘Aquaman,‘ but I did’. ”

The quote was quickly picked up by some outlets and began trending online. While some fans were confused by the comments, many were quick to point out that Yahya, 36, is a Yale-trained actor, and his use of the phrase “clown work” is specific. One user wrote, “He went to Yale School of Drama, “clown work” does not mean what you think it means…”

Yahya is appearing to have fun with the headlines, responding to Variety’s tweet with a picture of himself wearing a clown nose. He wrote in the caption, “Tempted to clarify, but for that’s no fun. Instead, heres a pic of myself on the way to work on Trial of Chicago 7. Spy anything? Aquaman in theaters Dec 2023! #justiceforclowns.” 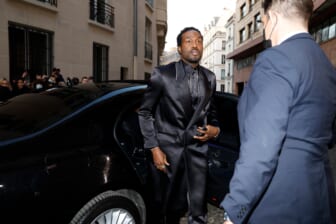 Tickets are currently on sale for “Topdog/Underdog” on Broadway, which starts previews later this month.