The iHeartRadio Music Festival is slated for Sept. 23 and 24 at Las Vegas' T-Mobile Arena.

Nicki Minaj is no longer in the lineup for the iHeartRadio Music Festival. Minaj and the festival confirmed the news on Wednesday via a social media post.

iHeartRadio stated on its official Twitter account that the 10-time Grammy Award-nominee was no longer among the performers:

“Unfortunately, due to unforeseen circumstances, Nicki Minaj will no longer be performing at our 2022 iHeartRadio Music Festival,” read the statement. “Our lineup will feature other amazing artists including recently announced Pitbull!! And we’ve got more surprise performances in store – stay tuned!”

Minaj herself would later quote tweet iHeartRadio’s statement with one of her own. While verifying her absence from the festival, she assured her fans that she would collaborate with iHeartRadio on future projects.

“Guys, I may have some surprises on the horizon to announce very soon in tandem with iHeartRadio,” Minaj wrote. “I wouldn’t be able to be there in time with all my gear for this one, tho. Love you & STAY TUNED for other exciting performances coming up.”

The iHeartRadio Music Festival is scheduled for Sept. 23 and 24 at the T-Mobile Arena in Las Vegas. Minaj was announced as part of the original lineup last June. Other artists on the roster include Lionel Richie, The Black Eyed Peas, Megan Thee Stallion, LL Cool J, Halsey, Luke Combs, Avril Lavigne, Sam Smith. 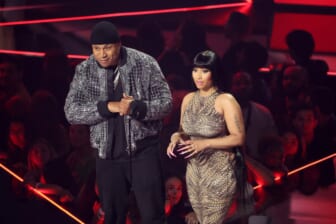 Minaj performed a medley of her hit songs as part of her receipt of the Michael Jackson Video Vanguard Award on Aug. 28 during the 2022 “MTV Video Music Awards” at the Prudential Center in New Jersey. She also served as the ceremony’s co-host along with LL Cool J and Jack Harlow. Minaj won the Best Hip-Hop Video Award for her collaboration with Lil Baby, “Do We Have a Problem.”

Last month, Minaj’s latest single, “Super Freaky Girl,” made history. The song debuted at No. 1 on the Billboard Hot 100. It became her first No. 1 hit on the chart as a solo artist, making her the first female hip-hop to achieve that feat since Lauryn Hill in 1998 with “Do-Wop (That Thing).”