Lizzo, a giant blunt and cartoon apes rank among the most unforgettable moments of the annual awards ceremony.

Before the 2022 “MTV Video Music Awards” (VMAs) started, the event was already destined to be special. Announcements that Nicki Minaj and the Red Hot Chili Peppers would receive special awards promised big moments, as did scheduled performances from Lizzo, Anitta, Bad Bunny, Marshmello and Khalid.

While anticipated programming generated buzz, the show featured plenty of surprises — from Fergie joining Jack Harlow on stage to a Cheech & Chong sighting. Here are theGrio’s five biggest moments from the show:

Lizzo’s Opening Performance Is “2 Be Loved”

After Jack Harlow and Fergie started the evening off with a “First Class/Glamourous” mashup, Lizzo closed out the awards opening sequence with a high-energy performance. Dressed in a pink tunic and tights ensemble with cut-outs on the bodice, arms and legs, she started with a quick pass of her hit single, “About Damn Time,” before kicking off her new song, “2 Be Loved (Am I Ready).” Lizzo performed in front of a digital projection backdrop, featuring colorful silhouettes of herself dancing.

Snoop Dogg and Eminem were in the house to perform their VMA-nominated collaboration, “From the D 2 the LBC.” The VMA stage couldn’t contain the two rap superstars as the smoke from Snoop’s supersized blunt transported them to the metaverse, inspired by the virtual game, “Otherside.” The 3D animation took the rappers on a virtual journey and transformed them into their individual NFT Bored Apes personas before they returned to finish their performance before the live crowd.

Singer Kane Brown provided the lone representation of country music. He performed his single, “Grand,” at the outdoor Toyota Stage in Fort Lee, New Jersey. Backed by a six-piece band, Brown on “Grand” combined a country twang, the cadence of a trap-rap song and rock ‘n’ roll bombast. The crowd ate it up, making it one of the most energetic performances of the evening. 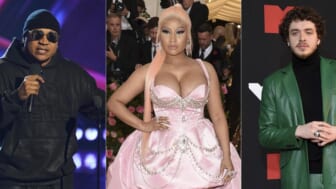 Bad Bunny packed a lot into his moment in the spotlight. Playing before a packed Yankee Stadium, he performed “Titi Me Pregunto” with a set that included palm trees, pyrotechnics and national flags from Puerto Rico and the Dominican Republic. The climax of his performance came when he kissed a female and male background dancer. After Bad Bunny’s performance, NBA superstar Carmelo Anthony presented him with the Artist of the Year award.

Nicki Minaj perhaps was having the best night of anyone. She co-hosted the show with LL Cool J and Jack Harlow and her collaboration with Lil Baby, “Do We Have a Problem,” won Best Hip Hop Video. But the moment she received the Michael Jackson Video Vanguard Award certainly had to constitute the highlight of her night.

She performed a medley of hits throughout her career that spanned from her verse on Kanye West’s “Monster,” to “Moment 4 Life” to her latest No. 1 hit, “Super Freaky Girl.” Members of her fanbase, “The Barbz,” presented her with the video vanguard award. During her acceptance speech, she acknowledged to musical titans. “I wish Whitney Houston and Michael Jackson were here,” she said. “I wish that people understood what they meant and what they were going through.”