Whoopi Goldberg slams racist fans attacking ‘The Rings of Power,’ ‘House of the Dragon’: ‘What is wrong with y’all?’

The EGOT winner returned to the hot topics table on "The View" alongside her co-hosts for the show's Season 26 premiere.

“The View” is back for its 26th season and on Tuesday’s premiere the panel wasted no time getting into some of the biggest hot topics of the week, including the racist backlash “The Rings of Power” and “House of the Dragon” fantasy shows have received since their debuts this month.

At the premiere of the popular daytime talk show, “The View” debuted its official new lineup of co-hosts: returning hosts, Whoopi Goldberg, Joy Behar, Sunny Hostin and Sara Haines, as well as new conservative host, Alyssa Farah Griffin. After a number of political segments at the top of the show, the women dived into the latest headlines coming out of Prime Video and HBO’s big-budget fantasy series making waves.

This week, “The Rings of Power,” a prequel to “The Lord of the Rings” trilogy, premiered on Prime Video followed by positive reviews from critics and record ratings for the streamer. Yet a small (yet very vocal) minority of fans seems to be complaining about the diverse casting in the series, calling it “too woke” as the cast is sizably more diverse than any other LOTR property. Similarly, HBO’s “Game of Thrones” prequel, “House of the Dragon,” is receiving equivalent backlash for the few Black characters in the series, including Steve Toussaint’s Lord Corlys.

Goldberg, an avid fantasy fan herself outside of starring in epics like “Star Trek: The Next Generation,” was not having any of it. She railed against the backlash, asking why certain fans are totally fine with watching dragons and hobbits but can’t seem to wrap their heads around Black people in the same world. 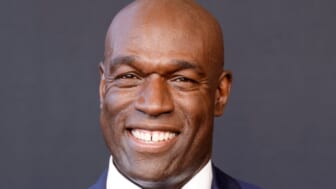 Audience members cheered on Goldberg, while hosts Hostin and Haines agreed with the EGOT winner, citing Toussaint’s recent quote about the reaction to his casting. As theGrio previously reported, the actor told Men’s Health, “They are happy with a dragon flying. They’re happy with white hair and violet-colored eyes, but a rich Black guy? That’s beyond the pale.”

“All of y’all who have problems because there are Black hobbits … Get a job,” Goldberg continued. “Get a job! Go find yourself, because you are focused on the wrong stuff.”

Watch the clip from the premiere below:

The first few episodes of “The Rings of Power” and “House of the Dragon” are currently streaming.