Standup comedian and writer David A. Arnold dies at 54

Arnold wrote for shows like "Fuller House" and "Meet the Browns," while also starring in his own Netflix comedy specials.

Standup comedian, writer and actor David A. Arnold has passed away at 54.

Arnold’s family confirmed his death on Wednesday in a statement that Deadline obtained. “It is with great sadness that we confirm the untimely passing of our husband, father, brother and friend, David A. Arnold,” the statement reads.

“David passed away peacefully today in his home and doctors have ruled the cause of death due to natural causes. Please keep our family in prayer and respect our privacy at this time, as we are all shocked and devastated by this loss.”

He was just three stops into his planned cross-country comedy tour at the time of his death.

A Cleveland native, Arnold was known by many for his standup comedy, an art he began practicing when he turned 18, according to The Hollywood Reporter. Starting off as a club comedian at popular venues like The Comedy Store and The Laugh Factory, he went on to receive his own Netflix comedy specials. “David A. Arnold: Fat Ballerina” premiered in 2019, while his latest,”David A. Arnold: “It Ain’t For The Weak,” premiered in July.

Arnold also broke barriers as a writer in Hollywood, writing for popular shows like “Meet The Browns” and “Tyler Perry’s House of Payne” on TBS and “Raising Whitley” on OWN. He also wrote and produced on “Fuller House,” Netflix’s popular “Full House” reboot series. 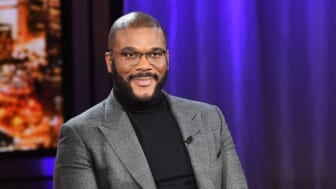 With “That Girl Lay Lay,” for which the writer created and served as showrunner, Arnold became one of the few Black showrunners currently heading shows in Hollywood. Nickelodeon also released a statement regarding his passing, saying in part that it is “shocked and incredibly saddened.”

The statement also reads, “David was an immense talent and a gifted storyteller with a wide range of fans, from adults through his stand-up, to kids and families through the Nickelodeon show he created and executive produced for us, ‘That Girl Lay Lay.‘ On behalf of everyone at Nickelodeon, we send our thoughts and condolences to his family, his friends and his fans.”

Arnold is survived by his wife Julie L. Harkness as well as his two children, Anna-Grace and Ashlyn.