Rhymes received the BMI Icon Award and Megan was co-winner of the Songwriter of the Year Award.

Rhymes was honored with the Icon Award, while Megan and Christopher “YC” Pearson took home the Songwriter of the Year Award, according to Variety. A pair of BMI executives hosted the ceremony: president and CEO Mike O’Neill and vice president of creative (Atlanta) Catherine Brewton.

O’Neill and producer Pharrell Williams were on hand to present Rhymes with his award. O’Neill stated that the 12-time Grammy Award nominee was honored for his “defining impact on hip-hop and mentoring the next generation of talent.” Rhymes has been making hit records since the 1990s, from his 1996 debut album, “The Coming,” to 2020’s “Extinction Level Event II: Wrath of God.”

“We’re all blessed with this gift. It’s one thing to identify with the gift; it’s another thing to believe in it once you identify with it,” Rhymes said. “The most beautiful part about it is I earned this … I’ve never been celebrated as an icon before, but I never had to question whether I was one.” He would also perform a medley of his hits, including “Put Your Hands Where My Eyes Can See” and “Break Ya Neck.”

Past winners of the BMI Icon Award include The Jacksons, Janet Jackson, Nile Rodgers and Snoop Dogg.

Megan and Pearson were co-winners of the songwriter honor, thanks to hits like Megan’s “Body” and “Cry Baby” and Pearson’s “Back in Blood” and “Time Today.” 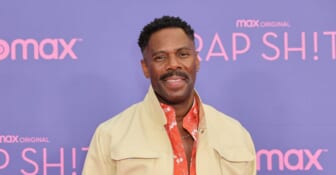 Another notable winner was Dernst “D’Mile” Emile. He won the Producer of the Year Award for his work on Silk Sonic’s debut album, his award-winning collaboration with H.E.R. and songs produced for Drake and Travis Scott.