Surprise is key part of migrant travel from Florida, Texas

DeSantis took from the playbook of a fellow Republican, Texas Gov. Greg Abbott, by surprising Democratic strongholds with large influxes of migrants and providing little or no information.

The chief executive of Martha’s Vineyard Community Services was wrapping up work when she looked outside to see 48 strangers at her office with luggage, backpacks and red folders that included brochures for her organization.

The Venezuelan migrants who were flown to the wealthy Massachusetts island from San Antonio on Wednesday by Florida Gov. Ron DeSantis said they were told they were going to Boston.

DeSantis took from the playbook of a fellow Republican, Texas Gov. Greg Abbott, by surprising Democratic strongholds with large influxes of migrants and providing little or no information.

“They were told that they would have a job and they would have housing,” said Elizabeth Folcarelli, who leads Martha’s Vineyard Community Services and described the scramble for shelter as a “huge challenge.”

Two flights to Martha’s Vineyard stopped in the Florida Panhandle, Henriquez said. While on board, migrants got brochures and maps of Massachusetts.

An unsigned letter told migrants to notify U.S. Citizenship and Immigration Services of address changes, though U.S. Immigration and Customs Enforcement is actually responsible for tracking migrants, Henriquez said. “This is terrible advice,” he said.

Many immigrants have appointments with ICE on Monday in San Antonio. Others were ordered to report to immigration authorities in two weeks to three months in cities including Philadelphia and Washington. 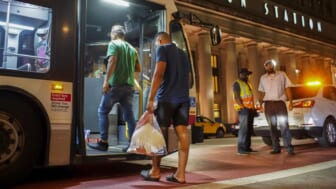 In San Antonio, a Latina woman approached migrants at a city-run shelter and put them up at a nearby La Quinta Inn, where she visited daily with food and gift cards, Henriquez said. She promised jobs and three months of housing in Washington, New York, Philadelphia and Boston.

The woman, who introduced herself to migrants as Perla, promised jobs, housing and support for their immigration cases, said Oren Sellstrom of Lawyers for Civil Rights, which offered free consultations.

The city of San Antonio was unaware of the flights, said Maria Villagomez, deputy city manager.

Pedro Luis Torrelaba, 36, said he was promised work, food and housing. He thought he was going to New York.

“I am not a victim,” he said Friday, expressing gratitude to residents of Martha’s Vineyard for their hospitality. “I simply feel misled because they told a lie and it has come to nothing.”

The migrants were being moved voluntarily Friday to a military base on nearby Cape Cod. Republican Gov. Charlie Baker said he would activate up to 125 National Guard members to assist the Massachusetts Emergency Management Agency.

DeSantis said Friday that most migrants intended to come to Florida and that the trip to Martha’s Vineyard was voluntary. He did not address the migrants’ claims that they were told they were going elsewhere.

Texas has bused about 8,000 migrants to Washington since April, including more than 100 Thursday to Vice President Kamala Harris’ home. It also has bused about 2,200 to New York and 300 to Chicago.

Arizona has bused more than 1,800 migrants to Washington since May, but has kept officials on the receiving end informed of the plans. The city of El Paso, Texas, has sent at least 1,135 migrants on 28 buses to New York since Aug. 23 and, like Arizona, shares passenger rosters and other information. 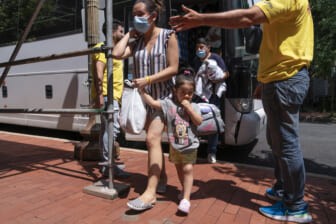 Last week, a 2-year-old who arrived in New York from Texas was hospitalized for dehydration and a pregnant woman on the same bus was in severe pain, according to advocates and city officials.

Volunteer groups often wait hours for buses arriving from Texas in a designated space of Manhattan’s Port of Authority Bus Terminal. They rely on tipsters for help.

“It’s a problem because we don’t know when the buses are coming, how many buses are coming, if anyone on these buses has medical conditions that they will need help with, if they need a wheelchair,” said Manuel Castro, commissioner of the New York City Mayor’s Office of Immigrant Affairs. “We at least want to know that so that we can best help people as they arrive.”

A contractor that Texas hired to bus migrants signed an agreement that prohibits them from talking to New York officials, Castro said.

Some fathers have arrived in New York while their spouses and children were sent to Washington, said Ilze Thielmann, a volunteer director with TLC NYC, a group working to reunite them.

Illinois Democratic Gov. J.B. Pritzker said his administration has reached out to Texas but gets no information. The first migrants arrived at Chicago’s Union Station from Texas on Aug. 31.

Abbott’s office dismissed complaints about lack of coordination and keeping cities guessing about the governor’s next moves as he tries to stoke opposition to President Joe Biden’s border policies.

“Instead of complaining about fulfilling their sanctuary city promises, these Democrat hypocrites should call on President Biden to do his job and secure the border — something the president continues failing to do,” spokeswoman Renae Eze said Thursday.

Arizona has been working since May through the Regional Center for Border Health, which runs clinics for low-income patients in Yuma. Several days a week, a bus heads east from a clinic office in suburban Somerton.

Some migrants seem unaffected by the chaos.

Cleiver Rodriguez of Venezuela said he appreciated the free ride from Texas to New York, where he came looking for work.

“I don’t have any kind of opinion because at least they helped me get here,” Rodriguez, 24, said as he left a shelter.