It’s been over 20 years since Angela Moore, Topanga Lawrence, Cory Matthews and others said goodbye on the final season of “Boy Meets World.” Since then, however, actress Trina McGee, the sole Black lead to ever grace the popular ’90s sitcom, has opened up about her (often challenging) experience on the series.

In a recent podcast appearance, McGee reflected on moments she was told to “turn down her Blackness,” revealed why her character didn’t appear in the series finale and more.

McGee joined the series after coming from various sitcoms with primarily Black casts and quickly noticed a shift in workplace dynamics with the all-white cast of “Boy Meets World.”

“Coming from Black sitcoms, I always had to have like a Black meter,” she revealed on the episode, Variety reported.

“My Black meter was probably down to a 2. I remember when I was doing the “Angela’s Ashes” episode, somehow my Black meter had slipped up and I was at about a 9. Michael [showrunner Michael Jacobs] came over to me and his note was, ‘Hey Trina, just turn down the Telma Hopkins about eight notches.’ I knew exactly what he was talking about and I did … There are so many things you guys are so lucky you didn’t have to think about.”

Telma Hopkins starred on another “TGIF” show on ABC — “Family Matters” — that had a predominantly Black cast.

The episode also allowed the cast members to set the record straight with each other after all of these years, including why McGee’s final episode was “Angela’s Ashes” and not the series finale.

“I remember after we taped the show, I had said to a person, ‘Why aren’t we on the last show?’ Because I know the last show was going to be the one with the ratings and the crying and all the stuff,” she told the hosts. “I was under the impression that y’all got together and did not want me in the last show, for some reason I was going to take some shine or something to that effect. That was really hurtful to me for a long time. To make it worse, people of color tend to look into things a little harder sometimes … I have honestly had that in my head for 20 years.” 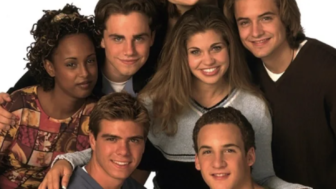 “Can we say for the record, Trina, that never happened,” Friedle said in response. “That’s not competitiveness, that’s sociopathy. This pisses me off. This is next level,” to which McGee responded, “I believe you.”

As theGrio previously reported, McGee said she experienced racism on the set of the show, revealing that on one occasion while in hair and makeup she was called “Aunt Jemima.” Friedle, who made the comment, opened up during the podcast about the interaction with McGee.

“In my head, I attached no cultural significance to that whatsoever. I saw a person who I thought was my friend but didn’t know very well, wearing a big, red hat. That’s all I saw.”

In the moment, McGee explained the comment to him and he “apologized.”

“It literally changed my life,” Friedle added. “That moment was the moment where I was like, you can’t just say stuff. You can’t throw stuff out there, because you think it’s funny and walk away. You could be hurting people.”

The full episode of “Pod Meets World” is currently streaming.