Tyler Perry on release of ‘A Jazzman’s Blues’ after 26 years: It feels like a kid ‘going off to college’

HIs new film premieres this week on Netflix.

“A Jazzman’s Blues” is almost here. The latest project from Tyler Perry — his first ever screenplay — is finally coming to screens via Netflix. TheGrio sat down with the media mogul to break down the project, how he cast the two leads and more.

As theGrio previously reported, Perry wrote the screenplay for “A Jazzman’s Blues 26 years ago. Starring Joshua Boone and Solea Pfeiffer, the film is a “sweeping tale of forbidden love,” that, “unspools forty years of secrets and lies soundtracked by juke joint blues in the deep South,” Netflix notes in the description.

“I feel like I understand what parents feel when their kids go off to college,” Perry explained, reflecting on the 26-year process for the film to get made. “I feel a little bit of grief and sadness because I held onto it so long, but I’m really excited that the world gets to see it.”

A grand love story hinges on solid casting of the two leads, something that was front of mind for Perry.

“What was important for me is that there were actors that were able to do the work, ask the right questions and understood what it meant to be in the period,” he said. “I mean, they are phenomenally in the period. They sank themselves into it and that, for me, let me know I had the right team.” 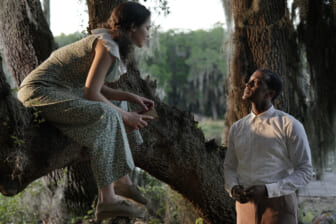