Tyler Perry’s latest project is officially a month away, and Netflix just dropped the first trailer for the creator’s highly anticipated film, “A Jazzman’s Blues.”

As theGrio previously reported, “A Jazzman’s Blues” is a special project for Perry, as it was the first screenplay the esteemed Hollywood heavyweight ever wrote (26 years ago). The film, premiering on Netflix next month, is a 40-year epic that features Joshua Boone and Solea Pfeiffer as star-crossed lovers. Per the official description obtained by theGrio, the film is “A sweeping tale of forbidden love,” that, “unspools forty years of secrets and lies soundtracked by juke joint blues in the deep South.”

The official trailer offers a first look at the romantic film, including performances by Boone and Pfeiffer, an original song by Ruth B. and more. The clip wastes no time diving into the forbidden love story of Bayou (Boone) and Leanne (Pfeiffer). “I need you to be happy because we can’t be sad together,” Leanne tells Bayou in the clip. “You are the only person that makes me feel safe.”

When Leanne’s mother not only whisks her away from home but ultimately away from Bayou, the trailer moves through their 40-year love story. Through the years, while living their own lives, the two can’t seem to stay apart from (or get over) each other. While seemingly reuniting years later, Leanne tells Bayou, “I thought you moved on.” He replies, “How could I do that when my heart only beat for you?” 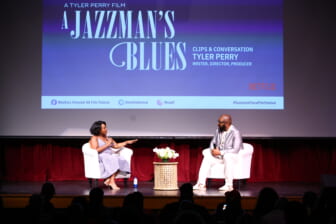 In addition to its two leads, the project boasts a stacked creative team, including, of course, Perry as writer, director and producer. Debbie Allen lends her talents as choreographer, while music is by Aaron Zigman. The rest of the cast includes Amirah Vann, Austin Scott, Milauna Jemai Jackson, Brent Antonello, Brad Benedict, Kario Marcel, Lana Young and Ryan Eggold.