The 2022 Global Citizen Festival, held on the Great Lawn of New York’s Central Park, was full of memorable moments which helped bring in billions of dollars to combat extreme poverty all over the world.

Acts like the Jonas Brothers, Charlie Puth and Metallica showed out live for the tens of thousands of people in attendance, while clips from the sister festival in Accra, Ghana, showed amazing highlights of concurrent performances from acts like Usher, SZA and more.

Before the New York concert began, clips from the Ghana concert were projected on the stage screen for the Central Park crowd. Tems started her set with a rendition of Bob Marley’s “No Woman No Cry,” the same version shown in the “Black Panther: Wakanda Forever” trailer. Dressed in a turquoise lace one piece and sunglasses, the Nigerian singer got emotional early in song, overwhelmed by the magnitude of the moment. She also performed her smash collaboration with Wizkid, “Essence,” putting both the Accra and New York crowd in a frenzy of movement and singing.

Angélique Kidjo Gives A “Once in a Lifetime” Performance

The New York festival was split between two separate stages. Following The Jonas Brothers’ opening set, Angélique Kidjo kicked off her set on the secondary stage, stationed near the center of the Great Lawn. Although the five-time Grammy Award-winner sang two songs, she packed a lot into that short time. The highlight was “Once in a Lifetime,” a selection from her Talking Heads cover album. Her dancing become so intense, she got rid of her headwrap, revealing a short hairdo. She made her way through the crowd, thrilling the audience with her lively rendition. 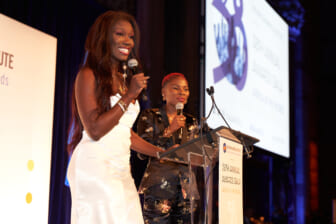 Mariah Carey and Misty Copeland Team Up For “Hero”

Mariah Carey had quite a few memorable moments in her set. She opened with a four-song medley of smash hits “Fantasy,” “Heartbreaker,” “Obsessed” and “Honey.” She also brought out The Lox’s Jadakiss and Styles P for the remix of “We Belong Together.” But the best moment came in the form of her set closer, “Hero.” Carey was accompanied by ballet dancer Misty Copeland and other ballet dancers for the inspirational, instantly classic moment.

Billy Porter Sings For The “Children”

Billy Porter looked fabulous on stage for his three-song set, dressed in gold sequins from head to toe. For the Grammy, Emmy and Tony Award-winner, children were at the center of his presentation. After singing a heartfelt tribute to kids written by Dr. Seuss, a group of children joined him and gave him a big hug at the end of the song. From there, he launched into his current single, the dance anthem “Children.”

Mickey Guyton Joins Metallica For “Nothing Else Matters”

Earlier in the day, Mickey Guyton sang a cover of Beyonce’s “If I Were a Boy” during her four-song set on the second stage. She wasn’t finished singing, though, as the festival closers, Metallica, brought her on stage with them. The country star joined the Rock and Roll Hall of Fame heavy metal outfit for “Nothing Else Matter,” a song she remade on the 30th anniversary release of Metallica’s self-titled album. It was an intimate yet intense duet between Guyton and front man James Hetfield, and a highlight of the band’s set.