YouTube initially stated that Minaj's latest video, "Likkle Miss Remix," featuring Skeng, violated community guidelines and was not suitable for viewers under the age of 18.

YouTube removed an age restriction from Nicki Minaj’s latest video, “Likkle Miss Remix,” on Monday after the superstar took the video streaming service to task. The video premiered on YouTube on Sunday.

“Likkle Miss Remix” features dancehall artist Skeng, its video capturing scenes at a party. Many women in the video are wearing thongs, twerking and gyrating with male dancers. Minaj herself also twerks, rapping alongside Skeng among the dancers, and inside a convertible sports car.

Minaj criticized YouTube for putting an age restriction for “Likkle Miss Remix” with a post on her Instagram page, according to Variety. A screenshot of the video restriction from YouTube stated it was “not suitable for viewers under the age of 18.” This caused Minaj to fire back at YouTube with a post of a screenshot of YouTube’s message that she violated community guidelines.

The Grammy Award-nominated rapper called YouTube out for hypocrisy, as well as alleging conflict of interests involving other companies and labels.

“Imagine this. They restricted my f**king video but have things a million fucking times worse on their bogus fking platform,” Minaj posted on Instagram. “This is what they do to keep you from winning while doing ads for other ppl and posting fake fking stats. Because the same ppl who run YouTube are in bed with a certain record label and mngmnt company.” 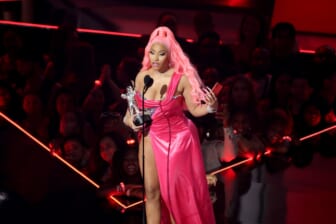 The “Super Freaky Girl” rapper has since deleted her Instagram posts regarding the issue.

“Likkle Miss Remix” is a single from Minaj’s Queen Radio: Volume 1, a greatest hits compilation. The video currently has over one million views on YouTube.