A couple claims Lanez sideswiped their car on New Year's Day in Miami.

Tory Lanez’s legal woes have increased. A couple alleges that the singer-rapper hit their car with his SUV, then left the accident scene.

Krishna and Jesse Grullon filed the claim, asserting that Lanez sideswiped their vehicle with his green Bentley SUV before driving off on or about Jan. 1, 2021 in Miami.

TheGrio obtained a copy of the suit, which was filed in Miami-Dade County’s 11th Judicial Circuit Court. It claims that the incident happened while the couple’s car was stopped at a red light at the end of an off-ramp off of a highway exit. The couple alleges that Lanez’s vehicle struck theirs from the rear left side shortly after.

The suit states that Krishna Grullon — who was four months pregnant at the time — was in the driver’s seat at the time of the alleged collision. They are suing for over $30,000 for two counts of negligence — one count from both Grullons. Andell Brown, Lanez’s attorney, told theGrio that the couple had subsequently asked for a sum far larger than what is stated in the lawsuit, noting that the amount of the monetary judgment that the Grullons is requesting had to meet a minimum threshold amount for the case to be heard in the 11th Judicial circuit court.

Brown told TMZ that there is no basis for the lawsuit “and that it will be laughed out of court,” noting that it is “made up.”

The Grullon’s claim was not made to Lanez’s insurance until July, despite the fact that the alleged incident took place in January. Brown also said the couple initially indicated to authorities that the car that struck theirs was silver, only to change it to green when they filed the lawsuit.

Brown told theGrio that he believes the couple filed the lawsuit hoping that “the media would eat it up.”

The lawsuit states that both Grullons suffered injuries to the body as a result of the incident as well as “aggravation of preexisting condition, pain and suffering, disability, disfigurement, loss of past wages, loss of future earning capacity, mental anguish, loss of enjoyment of life.” They are also seeking compensation for medical costs and “future damages.”

This is the latest in Lanez’s legal troubles. Last month, he was accused of attacking R&B singer August Alsina in Chicago, according to Pitchfork. Alsina claims that the assault occurred after he refused to shake hands with Lanez. The Los Angeles Police Department stated that “the allegations are serious and will be thoroughly examined.” 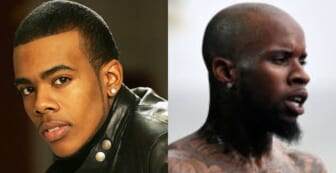 Lanez’s trial involving the alleged shooting of rapper Megan Thee Stallion is delayed, according to Rolling Stone. The trial was set to begin last month but was postponed to Dec. 9. Lanez is facing criminal charges for allegedly shooting Megan in the foot in 2020.