Netflix drops trailer for ‘Is That Black Enough for You?!?’ documentary

The film is set to release next month on the streamer and features talent like Whoopi Goldberg, Zendaya and others.

Netflix is celebrating Black contributions to cinema in the 1970s with a brand new documentary. From writer and film historian Elvis Mitchell, “Is That Black Enough for You?!?” is premiering in November on the streaming service and the first trailer for the project just dropped.

Making its world premiere at the New York Film Festival this weekend, the film is described as a “documentary and deeply personal essay,” according to the official press release that theGrio obtained. “The film examines the craft and power of cinema from a perspective often overlooked: the African American contribution to films released from the landmark era of the 70s.”

“Is That Black Enough For You?!?” dives deep into this rich history, including familiar faces who share their perspectives on the impact this group of Black talent had on the filmmaking industry nearly 50 years ago. They include Charles Burnett, Samuel L. Jackson, Whoopi Goldberg, Laurence Fishburne, and Zendaya. “These movies were about us,” Goldberg stresses in the trailer. 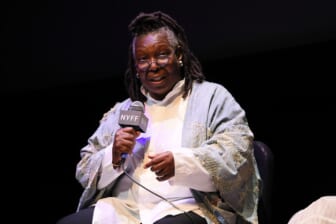 Also Read:
Whoopi Goldberg addresses ‘Till’ film critic: ‘That was not a fat suit, that was me’

“The film provides insight into the history of Black representation going back to the earliest days of cinema, and the cultural impact of witnessing unapologetic Blackness,” the synopsis concludes. Speaking to the incomparable Black talent in film during the ’70s, Fishburne states at the end of the trailer, “They were proof that we were here, that we create culture, that we have voices and that we will be heard.”

Mitchell wrote, directed and narrates the documentary. Steven Soderbergh, David Fincher, Angus Wall and Ciara Lacy are producers. Check out the trailer for the doc below:

“Is That Black Enough for You?!?” will premiere in select theaters on Oct. 28 before releasing globally Nov. 11 on Netflix.