Netflix drops latest trailer of ‘The School For Good And Evil’

Fantasy fans, rejoice! It is just days away from the release of Netflix’s highly anticipated adventure film, “The School for Good and Evil,” and the streamer just dropped another trailer before its premiere next week.

The film, which was recently listed as one of theGrio’s “must-see titles to stream this fall,” stars Kerry Washington and Charlize Theron as headmasters of the School for Good and Evil, “where the true stories behind every great fairy tale begin.”

When best friends Agatha (Sofia Wylie of “High School Musical: The Musical: The Series”) and Sophie (Sophia Anne Caruso) begin their training at the school, they find themselves on opposite sides of this modern fairy tale.

The trailer wastes no time acquainting audiences with Washington’s Professor Dovey, who runs the School for Good. And as Agatha and Sophie get used to life at the magical boarding school, something seems amiss when the young girls predict they were possibly put on the wrong sides.

“What if we did make a mistake,” Dovey asks Theron’s Lady Lesso, who runs the School for Evil. “What if we dropped them in the wrong schools?!”

What follows is perhaps a brimming battle between Agatha and Sophie as they both lean into their good (and evil) sides. “Sophie, you’re my friend,” Agatha pleads with an evil Sophie at the end of the trailer. “No, I’m your nemesis,” she responds. 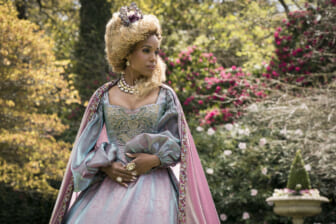 “The School for Good and Evil” premieres Oct. 19 on Netflix. Check out the trailer below: