OPINION: The former-coach-turned-U.S. senator for Alabama probably didn't share his racist thoughts with the families of Black players like he did at a Trump rally last Saturday, where he suggested Black people are criminals who are in cahoots with the left to steal America. 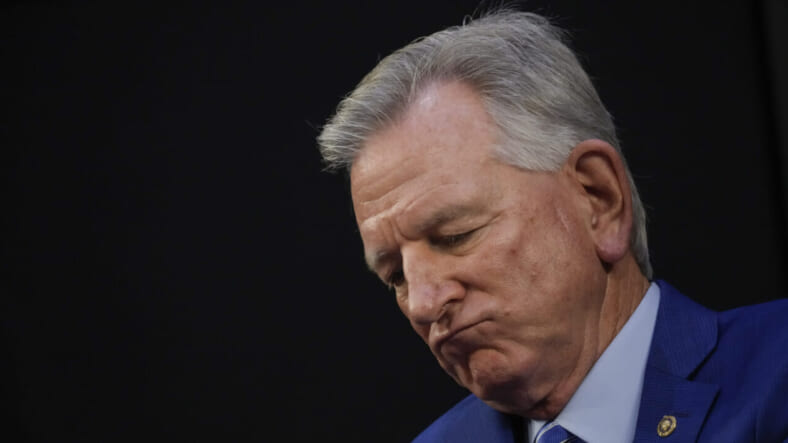 Tommy Tuberville spent 21 seasons as a college football head coach—primarily in the deep South—before Alabamans elected him to the U.S. Senate in 2020.

He likely visited hundreds of Black families over his career, sitting on their couches and eating their pie, hoping to sign their sons for his team. He led hundreds of Black players on the field and shared his personal insights in meetings. His job included molding players as a father figure, helping them grow and develop into solid, responsible young men.

I bet he didn’t share his racist thoughts that Black players and their families are criminals who are in cahoots with the left to steal America. 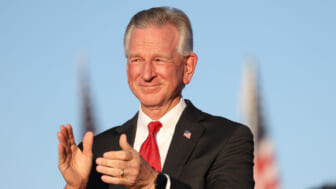 “[Democrats] want crime because they want to take over what you got,” Tuberville told an overwhelmingly white crowd last Saturday at a Donald Trump rally. “They want to control what you have. They want reparations because they think the people that do the crime are owed that. Bullsh–! They are not owed that.”

Such thinking is traditional in the Southeastern Conference, the nation’s biggest and baddest for college football, where Tuberville spent 14 years as a head coach. True to its Dixie roots—member schools are located in nine of the 11 confederate states—the SEC wasn’t fully integrated until 1972; the league continues to make painful racial history a thing of the present, again and again.

Tuberville can expect strong support from one former school, the University of Mississippi, which stubbornly clings to its racist nickname. At Alabama, the SEC’s standard-bearer, a group of students and faculty want the word “Dixie” removed from the fight song. Among two schools expected to join the SEC in 2025, Texas has embraced its alma mater’s song, minstrel roots notwithstanding.

“It’s not whether you have to sing or not; it’s humiliation that requires you to be there while others stand and sing and pay homage or honor to a racist song,” Gary Bledsoe, president of the Texas N.A.A.C.P., said at a news conference about the controversy.

As a girl dad, I never hosted football coaches on recruiting visits. However, I can envision Tuberville types in the family room, trying to generate warm and fuzzies, acting like allies who are down with the cause. They’d speak glowingly about my son, affirming his worth and proclaiming his significance.

But to them, the only Black lives that matter drive profits in the prison industrial complex. And fill roster spots for gigs that can pay $10 million per year.

He hasn’t walked the sidelines since 2016 but goes by “Coach Tommy Tuberville” on his Twitter page, where he’s tossing a football. Though his office is now on Capitol Hill, he resembles countless former colleagues with offices on campus and in locker rooms.

I expected those coaches and administrators to denounce his vile comments and rebuke such thoughts. It would have been easy to do publicly, even if privately they cheered wildly like that crowd on Saturday.

Not to paint with Tuberville’s same broad brush, but I wonder about his former brethren. Actually, I only wonder about those who have yet shown their hand, as opposed to, say, Mike Gundy and his younger brother, Cale Gundy. Surely the Gundy family isn’t the only one to raise anti-Black coaches who are getting rich off unpaid Black players.

Tuberville wouldn’t be a senator if he hadn’t spent four decades as a football coach. And he wouldn’t have lasted in college if he spewed his racist rhetoric out loud. Unfortunately, logic suggests there are more like him at this very moment, putting on airs to curry our favor while hating our existence. 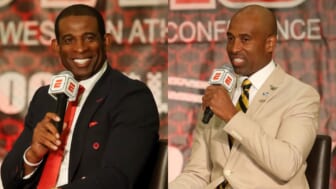 Also Read:
Who is SWAC? The answer is obvious

Such coaches aren’t good for young men’s development. They reinforce racial stereotypes, foster division and support white supremacy, a dangerous cocktail that tends to encourage violence. “Senator Tuberville’s comments are flat out racist, ignorant and utterly sickening,” NAACP President Derrick Johnson said in a statement on Monday. “His words promote a centuries-old lie about Black people that throughout history has resulted in the most dangerous policies and violent attacks on our community.”

Would I have let my imaginary son play for Tuberville? Maybe, if the coach snowed me.

But as best we can, Black parents have a responsibility to keep their kids away from such coaches. At the very least, grill prospective coaches on the issues of racism and their personal stance. Then turn up your BS meter, listen to your gut instincts and pray that you aren’t being conned.

Perhaps some of us are more concerned with the coach’s ability and the child’s performance. An institution’s resources can be overwhelming considerations, too, especially when a school is preparing to spend hundreds of millions on facilities. If choosing that route with a coach who’s suspect, be sure to immunize your kids. Inject them with repeated doses of Black history and excellence—past and present—to ward off the coach’s sickness.

Or, you know, just send them to an HBCU.