PnB Rock’s girlfriend has revealed that the rapper spent his final moments shielding her from gunfire when he was shot to death last month at Roscoe’s Chicken & Waffles in Los Angeles.

The Los Angeles Times reports that Stephanie Sibounheuang returned to her Instagram account on Thursday to post a video montage showing various moments of her and the rapper’s time together. In the caption, Sibounheuang makes clear she is “not ok” after witnessing the murder of the father of her 2-year-old daughter.

As reported previously on theGrio via The Associated Press, PnB Rock — whose real name is Rakim Allen — was fatally shot during a robbery on Sept. 12 at a Roscoe’s Chicken & Waffles restaurant in south Los Angeles. Rock was eating with Sibounheuang when a robber approached their table and demanded items from the victim, according to Los Angeles Police. A verbal exchange ended when the assailant opened fire, striking the Philadelphia artist multiple times.

“My man saved my life, Throwing me under that table. I’m not supposed to be here but bc of him. I am. No one would be able to handle this,” Sibounheuang’s Thursday Instagram post asserted. 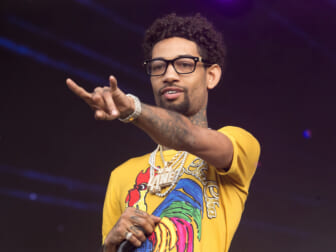 Sibounheuang went on to note that she constantly relives the shooting in her head, including being “forced in the back of a police car, locked in an interrogation room all night.”

Police arrested a 17-year-old boy and a woman named Shauntel Trone, 38, on Sept. 28 in connection to PnB Rock’s death. The Los Angeles Times reported that the minor’s father, Freddie Lee Trone, 40, was also named “as being a person involved.” He was apprehended days later in Las Vegas.

It was initially believed that a Sibounheuang Instagram post indicating the couple’s location, tagging PnB Rock, tipped off his attacker. But after three suspects were identified in connection to the shooting, it was revealed that the father-son suspects were already in Roscoe’s parking lot, not lured to the location by her social media post, according to The Times.

Sibounheuang said “everything was finally perfect for our family” prior to the shooting.

“My man had gave his self to GOD. Did a complete 360. He was loyal. He was patient. He was teachable and a teacher. I was finally letting the past go, and letting him show up as his changed self,” she maintained.

“My last day with u. I told you ‘I know you my husband. I know you my soulmate’ Even it was for a little bit. At least we got to experience what having a soul mate is … and for that … I am grateful,” she wrote.

Sibounheuang concluded her post by noting that “Pain is real. No matter how rich u are, how famous u are, how spiritual u are. Some pain is inevitable.”