The Brooks Atkinson Theatre will be renamed after the famed singer, actress and civil rights activist on Nov. 1.

Broadways’ Brooks Atkinson Theatre will be officially renamed the Lena Horne Theatre next month. The Nederlander Organization announced that this will be the first Broadway theater named after a Black woman.

The renaming ceremony is scheduled for Nov. 1 at 256 West 47th Street in Manhattan, the address of the Brooks Atkinson. The celebration will include a DJ’d block party, special performances and the unveiling of a new marquee. Stars and luminaries from both the Broadway and entertainment communities are also expected to attend.

Plans to rename the Brooks Atkinson Theatre began in 2020 when The Nederlander Organization teamed up with Black Theatre United. Together, the two organizations kicked off a mission to choose a name of a Black theater legend to don the theatre.

Horne, born and raised in Brooklyn, was a legendary singer and civil rights activist. She was the first Black woman to earn a Tony Award nomination for Best Leading Actress in a Musical. The renaming is to reintroduce Horne and her work to a new audience as well as celebrate her contributions to Broadway and the nation.

In addition to her work in music and theater, Horne lobbied Congress with Eleanor Roosevelt to help enact anti-lynching legislation. She often entertained troops on USO tours, and performed and spoke on behalf of the NAACP, SNCC and the National Council of Negro Women. 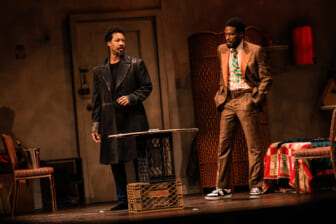 Aside from her lifelong accolades and avid civil service, Horne had strong ties with the Nederlander family. James M. Nederlander, father of The Nederlander Organization’s current leader James L. Nederlander, was a lead producer of Horne’s 1981 Broadway show, “Lena Horne: The Lady and Her Music.” Horne won a special Tony and two Grammy Awards for that show.

The Brooks Atkinson Theatre is currently the home of “SIX: The Musical.” It received eight Tony Award nominations in 2022 and won two: for Best Original Score (Music and-or Lyrics) Written For the Theater and Best Costume Design For a Musical.

This won’t be the first time a New York venue is named after Horne. In 2021, The New York City Department of Parks and Recreation renamed the bandshell at Brooklyn’s Prospect Park the Lena Horne Bandshell. The annual BRIC Celebrate Brooklyn! festival has taken place at the park every summer since 1978.