What happens to people when they allow their pain, anguish and heartbreak to build up inside of them for so long? Not only can it eat away at the soul of people, it can cause them to inflict that same pain on those close to them.

“Topdog/Underdog,” Suzan-Lori Park’s Pulitzer Prize-winning play, is a thorough examination of this process. A revival opened this week on Broadway at the John Golden Theater.

This dark comedy silos two brothers inside an apartment, navigating near poverty on the surface, hustling to scrape by together. But their struggle is increased by the hardships of lost love, both shared and individual. Those hardships manifest themselves humorously, poignantly and even violently.

The revival is incredibly explosive from the start. Park’s dialogue is very witty and emotional, but what makes the revival a success is the casting of its two leads, Corey Hawkins and Yahya Abdul-Mateen II.

What the audience experiences with these two actors are disappearance and immersion. No trace of either actor is left on that stage; they completely transform into brothers Linc (Hawkins) and Booth (Abdul-Mateen II).

Both gained fame by starring in iconic television and film projects. Hawkins was Dr. Dre in “Straight Outta Compton,” took the lead in Fox’s “24: Legacy” and starred in the film adaptation of “In the Heights.” Abdul-Mateen II was Dr. Manhattan in HBO’s “Watchmen,” Morpheus in “The Matrix: Resurrection” and was the lead in the “Candyman” reboot. 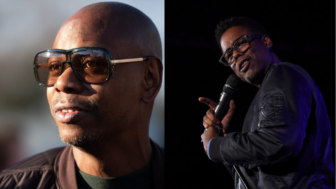 The fact that these men, the only actors in the play, portrayed characters well-known in the public consciousness and still managed to keep the crowd invested in the story of these two brothers in “Topdog/Underdog” is a testament to their acting chops.

Over the course of the play, they slowly  — reluctantly — unravel the bandages on old wounds. Booth, the younger brother, is an ambitious hustler, boosting clothes and items to get what he wants and needs. Linc, the big brother, is trying to stay on the straight and narrow, holding down a menial but honest job dressing up like his namesake, President Abe Lincoln, at a local arcade.

The tension quietly grows between them as Booth constantly urges Linc to teach him a three-card monte scheme to make more money, something Linc excelled at in his youth. Linc keeps Booth at bay, trying to make legit money. The constant push and pull between the men — going back and forth from cursing each other to wryly ribbing each other to reminiscing about happier times — gives the play a heart and authenticity that are amazingly genuine.

The play’s funny moments work so well because they aren’t played off as heavy-handed gags. Scenes like Linc scaring Booth after coming home in white face as Abe Lincoln and Booth removing his coat to unload two full suits he boosted are displayed so realistically that you laugh because you can relate.

What Hawkins and Abdul-Mateen II do best is manifest the long-term effects of abandonment. Their parents walked out on them as teenagers, a fact that reveals itself in more detail in the second act. Linc is still haunted by his divorce from his first wife, Cookie, while Booth is holding onto hope that his ex-lover, Grace, wants him back.

While they each share the same abandonment issues, they each deal with them in different ways. Linc tries to sweep feelings under the rug and move on with his life. On the otherhand, Booth channels his hurt into delusion. It’s played out via the play’s thematic motif of the three-card monte scam that Booth is desperate to learn. It’s that delusion that triggers a violent and tragic explosion by the end of the play. 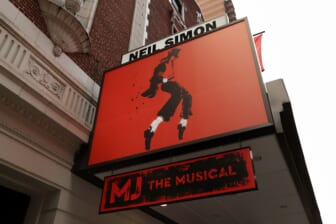 Also Read:
‘MJ the Musical’ is going to London

The three-card monte also bookends the play and is a metaphor for both men: the act of making the right decision amid a flurry of deception, otherwise you lose everything.

“Topdog/Underdog” is only playing until January 2023. It should be a Broadway staple, and hopefully, will become one.