The special legislative session was held several weeks after the World Health Organization issued an alarm about 66 deaths from acute kidney injury.

BANJUL, Gambia (AP) — Gambian lawmakers on Wednesday urged compensation for the families of 70 children who authorities believe may have died after taking a contaminated cough syrup imported from India.

The special legislative session was held several weeks after the World Health Organization issued an alarm about 66 deaths from acute kidney injury. Gambian authorities launched an urgent door-to-door campaign to confiscate any remaining bottles of the syrup. The toll has still risen by four more deaths.

“My mind is still stuck on the last moments I had with my child,” she told The Associated Press. “After experiencing problems urinating, my baby had to face unbearable pains. Justice must be served even it means inflicting huge penalties to the Indian company.”

The WHO’s medical product alert said four cough and cold syrups produced by Maiden Pharmaceuticals Limited in India “have been potentially linked to acute kidney injuries” in children. The U.N. health agency has said that it is pursuing investigations with the company and regulatory authorities in India.

“If we find out that the deaths are tied to the contaminated drugs, Gambia must sue,” said Modou Lamin B. Bah, vice chair of the Select Committee on Health.

Phone calls to the headquarters of Maiden Pharmaceuticals went unanswered after the product recall was announced by the WHO. 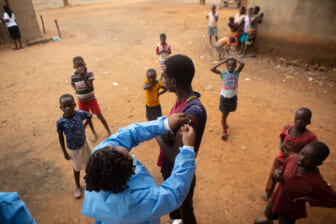 Lawmakers later adopted a motion saying that the government enquiry should further review the laws and regulations governing drug importation and licensing. Compensation for the families also remained at the forefront of Wednesday’s session.

Health Minister Dr. Ahmadou Lamin Samateh told lawmakers that the drug importer linked to the medicines flagged by the the WHO already has been suspended.

More than 42,000 cough syrup bottles have been collected out of the 50,000 that initially were imported to Gambia by the company, he added.