The esteemed film festival is set to return in person and virtually next June.

Get ready for ABFF in 2023. The esteemed festival will return in Miami next year, with Emmy award-winning writer, producer and actor Lena Waithe taking on the role as the festival’s official ambassador.

Planning for American Black Film Festival’s 27th annual event is already underway, with an in-person event planned for next June in Miami Beach, Florida, with a virtual event to follow. Last year, Issa Rae was the festival’s official ambassador, which saw the premiere of various projects like the creator’s new HBO Max series “Rap Sh!t,” episodes of Prime Video’s “A League of Their Own” and more.

This coming year, Waithe will take on the task of ambassador, helping to “bring awareness to ABFF’s mission of showcasing Black talent and discovering new voices and will collaborate with the festival for one-of-a-kind moments,” per the release sent to theGrio.

In a statement shared alongside the press release, Waithe expressed excitement regarding her collaboration with the festival, saying, “I am so honored to have been chosen as ABFF’s 2023 Festival Ambassador. I am excited to collaborate with the festival to shine a light on unique and groundbreaking stories and the creatives behind them.”

Festival producer and president of ABFF Ventures LLC Nicole Friday shared in a statement regarding Waithe’s inclusion in next year’s festival, “Lena is a powerhouse in the film and television industry and a trailblazer for emerging creative artists. Her commitment to elevate diverse voices personifies ABFF’s commitment to diversify Hollywood. We are excited to have her unique perspective and talent as our 2023 ABFF Ambassador.” 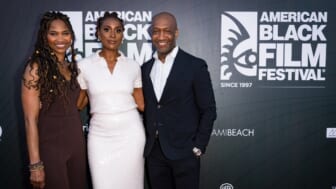 As Friday alluded to in her statement, Waithe’s work and dedication to not only protecting diverse talent but also fostering it is seen through her company, Hillman Grad Productions. Outside her achievements in TV and film with shows like “Twenties” and films like “Queen & Slim,” her production company’s mission is to, “empower underrepresented artists by amplifying and celebrating the stories and voices of diverse, historically marginalized communities across all industries.” The company also has a Mentorship Lab program for creative executives, actors and writers looking to break into and foster a career in the industry.

The 27th ABFF will return to Miami Beach June 14 to 18, followed by a virtual event June 19 to 25 on ABFF PLAY. For more on the festival, submission deadlines, how to attend and more, head to the official site here.