David Coulson, 55, was incarcerated from 2002 to 2022 in California under the Three Strikes law, 1990s legislation mandating life sentences following a third felony offense.

20 years into serving a life sentence for stealing $14, a Black man was released from a California prison last month following a recommendation from the state’s department of corrections and rehabilitation.

David Coulson, 55, was incarcerated from 2002 to 2022 in California under the Three Strikes law which mandated life sentences following a third felony offense. The law was adopted in many states nationwide as fears of crime and “habitual offenders” swept the United States. Nearly half of those behind bars due to the law today are Black, as reported by The Guardian.

Coulson, who was 35 at the time of his 2002 arrest, stole miscellaneous items from an open residential garage while he was homeless in Long Beach amid lifelong challenges with abuse, mental illness and drug addiction, according to the outlet.

Despite making away with only $14 worth of coins and a small scale, Coulson was arrested, and the crime was prosecuted as a burglary and robbery – adding the final two felony strikes on his record. He previously went to jail and prison while in his 20s for nonviolent offenses including attempted break-ins, though he never entered the homes, according to the outlet.

Coulson was not officially sentenced until 2006, as he was diagnosed with schizophrenia following his 2002 arrest and deemed unfit for trial. He began experiencing hallucinations and self-harming during his tumultuous childhood. He was born to a 16-year-old mother who struggled with drug addiction, put up for adoption at age four, and adopted by a family who reportedly beat him. Couldon was also sexually abused, per The Guardian.

He got involved with drugs, alcohol and gang activity as a teenager, experiencing being shot twice, according to the outlet.

Coulson told The Guardian that during his prosecution he felt nobody cared about the trauma he experienced in his youth.

“I was crying out for help. I was doing whatever I could to get the attention I needed. I was praying it wouldn’t end up with me in prison for the rest of my life, that someone would come to me and say, ‘What’s going on? What’s making you act this way? Why are you the way you are?’” he said.

Per the outlet, 33,000 people are currently serving life sentences in prison in the state under the Three Strikes law. 45% of them are African American, despite making up only 6.5% of the state’s population.

Coulson told the outlet he expected never to be released again — but California’s department of corrections and rehabilitation flagged his case for resentencing in August following his classroom accomplishments and volunteer work during his two decades behind bars, the Guardian reported. 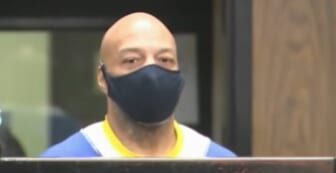 During a Sept. 13 hearing, Judge Daniel Lowenthal told Coulson that he was “shocked and angry” at how the court system previously treated him, adding that a more fitting sentence would have been probation and treatment.

“This is all I’ve ever wanted in my life,” Coulson said between tears during the hearing, as quoted by the outlet. “I’ve been crying out for help all my life, and no one has ever heard me. Finally, somebody has heard me.”