Booker, who was bested by Sen. Rand Paul, was aiming to become the state’s first Black senator.

Charles Booker has been defeated in his U.S. Senate race in Kentucky against incumbent Sen. Rand Paul. Booker was aiming to become the state’s first Black senator.

Paul came out victorious over Booker, 54.1% to 45.6%, according to AP News election poll data.

Booker, who in a previous interview with theGrio, said he is “proud” of the history he already made in this race as the state’s first Black person to be a major-party nominee for Senate, injected an aspirational and unifying tone familiar to Barack Obama, which earned the former president the kind of broad coalition support Booker was hoping for to win a statewide election in the solidly red Kentucky.

The red state hasn’t elected a Democrat to the U.S. Senate in nearly 25 years and has voted for every Republican presidential candidate since 2000. 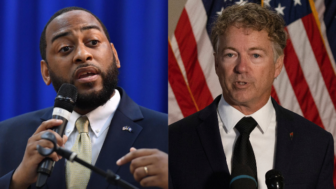 The 37-year-old lifelong Kentuckian, who comes from a “long line of ministers,” was Kentucky’s youngest Black state lawmaker when he was elected in 2018. Booker, who ran unsuccessfully for the Democratic Senate nomination in 2020, sought to rise above partisan politics to address issues he believed all Kentuckians could support, like halting hate, ending poverty, investing in solid infrastructure, and making health care more affordable.

Growing up in one of the poorest zip codes in one of the most impoverished states in America, Booker said a major focus of his campaign was addressing poverty, which affects hundreds of thousands of Kentuckians, white and Black.

“Poverty is generational in Kentucky,” declared the Senate nominee, who introduced his “Kentucky New Deal” agenda to address economic challenges in his state.

While Booker was unifying in his message, he was also not shy to call out his Republican opponent. The Democrat said Paul, the son of a former U.S. congressman and physician, “doesn’t understand” the economic hardships that he and other Kentuckians have endured.

“He is someone who is essentially a privileged, spoiled brat,” said Booker. “He doesn’t think he belongs or is responsible to anyone. He doesn’t see the struggles that we face because he hasn’t lived them. And quite honestly, he has sold us out.”

Booker said Paul “built a career out of weaponizing hate and hiding his hand,” and noted that the Republican lawmaker also voted alongside GOP senators to block a domestic terrorism bill after the mass shooting of nine African Americans inside a grocery store in Buffalo, New York, earlier this year. “He doesn’t think racism is a problem, and we can’t fix what we don’t face.” 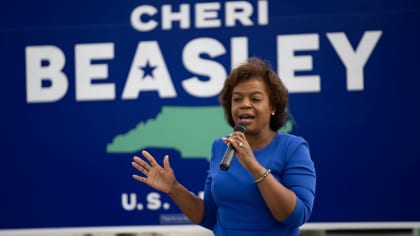 A lot is riding on this November’s elections for Democrats, who are seeking to hold onto their slim majority in Congress, particularly in the Senate. President Biden and Vice President Kamala Harris in the months and weeks leading up to Election Day delivered speeches across the country urging voters to elect more Democrats in the Senate in order to eliminate the Senate filibuster and pass Democratic agenda items like voting rights reform and federal abortion rights.