President Joe Biden said Wednesday during a White House press conference that he hopes Russian President Vladimir Putin will be more willing to negotiate the release of WNBA star Brittney Griner now that the United States midterm elections have concluded.

“My hope is that now that the election is over … Mr. Putin will be able to discuss with us and be willing to talk more seriously about [a] prisoner exchange,” President Biden said inside the State Dining Room before the White House press corps.

The president’s remarks came the same day it was reported that Griner, who has been detained in Russia since February and has since been convicted of possessing cannabis, has been moved to a penal colony in the region. The president said he is “determined” to bring the basketball star home safely.

The president also said he’s been in constant contact with Griner’s wife, Cherelle Griner, and has been keeping her updated on Brittney’s case.

The United States, which has classified Griner as “wrongfully detained,” has been engaging in back-channel negotiations with Russia for several months. Griner was sentenced in August to nine years in prison and last month her appeal was denied. After it was announced that Griner had been moved to another detention center, her legal team and agent issued statements.

Griner’s Russian lawyers, Maria Blagovolina and Alexander Boykov, said they do not have any information about her “exact current location or her final destination,” but are expecting to be notified, along with the U.S. Embassy, when Griner arrives at her new holding place. “Notification is given via official mail and normally takes up to two weeks to be received,” her lawyers said. 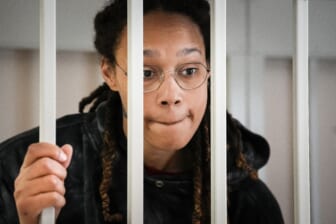 “As we work through this very difficult phase of not knowing exactly where BG is or how she is doing, we ask for the public’s support in continuing to write letters and express their love and care for her,” said Colas.

She said the Griner camp continues to be in close contact with the U.S. government and former New Mexico Gov. Bill Richardson’s Richardson Center for Global Engagement. The center is “using all available resources to determine her whereabouts, ensure her safety, and bring her home.” Richardson, known for striking foreign deals to free American prisoners, traveled to Moscow in September to help negotiate the release of Griner and another detained American, Paul Whelan.

Colas said she and Griner’s family are hopeful that “as we near nine months of detention, that BG and all wrongfully detained Americans will be shown mercy and returned home to their families for the holidays.”

Civil rights leaders and activists like Maya Wiley, president and CEO of The Leadership Conference on Civil and Human Rights, have also been calling for Griner’s release.

“It’s incredibly important that we in the United States remember that Brittney Griner is an American who’s being held hostage as a political tool against the United States,” Wiley told theGrio. “And we can’t allow that to happen. And we won’t.”

“It is absolutely despicable that the Russian government would do this to an international athlete, to an athlete that has been someone who has played basketball in Russia for so long,” she added. “We have to keep [her] situation front center, active and aggressively demanding justice for Brittney Griner.”