Mia Thornton on second season of ‘RHOP’: ‘There’s a lot going on’

"The Real Housewives of Potomac" star returns for her second season and finds herself in the center of some drama.

Mia Thornton is back and ready to play! “The Real Housewives of Potomac” star has returned to the popular reality series for her second season and theGrio caught up with her to break down her recent health troubles, her relationship with her castmates so far and what drama fans can expect from an already explosive Season 7.

Earlier this month, theGrio attended BravoCon, a massive Bravo-sponsored event organized to connect fans with their favorite “Bravolebrities,” including “The Real Housewives of Potomac.” Speaking to meeting fans and celebrating with her cast, Thornton told us it was “everything.”

“I didn’t exactly know what to expect,” she explained. “I’ve never been to a BravoCon before just, period, so when I walked in I as like, ‘Holy cow! OK this is what we’re doing, let’s have some fun!’ It’s nice to have all the fans in one spot and just to connect and have fun and to just have a chance to talk to them. I would do it again!”

With one season under her belt, Thornton assured theGrio that she is “having a great time” on the show. “I feel like I’ve always been here,” she said. “First season, I wasn’t sure about any of them, and second season I’m kind of like, ‘OK you guys are stuck with me, so get used to it!’ I was also able to be more myself with the ladies this time.”

Of course the season is not without drama, and this year Thornton seems to be in the thick of it as the other women begin to question her health struggles. Thornton shared on Instagram earlier this year that she had a cancer scare, telling her followers that she was undergoing testing. From the first episode, the ladies confront her with questions surrounding the vagueness of the post, leading to some tension between her and some of them. 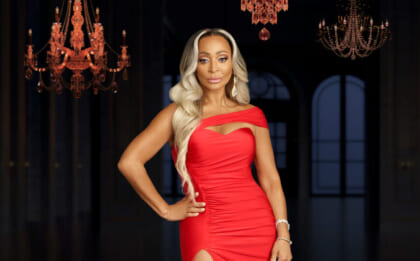 Thankfully, Thornton disclosed, she does not have cancer. But the doctors are “still trying to find out what’s wrong,” even now in November 2022. “While I am grateful that it is not cancer and there are no signs of cancer, thank God … it is really, really challenging to have all of these girls come at me,” explained Thornton, who revealed that she took care of her husband Gordon Thornton when he had cancer. She truly respects it.

“Social media was supposed to be my outlet because I’m scared and I [didn’t] know what I was going through. It’s really hard because my family is affected, currently and my kids are concerned, especially my 14-year-old,” she added. “They have to watch these girls question me, and they’re like, ‘Ma, they have no idea,’ and I’m like, ‘You know, just let people think what they want to think’ … this unfortunately comes with the territory when we wanna be transparent and honest with people it always gets scrutinized and that’s OK. It’s OK.”

As for the rest of the season, Thornton said there is “so much that goes on” within this group. “We are all Type A, I feel and so when you get a bunch of Type A powerful women in the room, what happens? We bump heads! But we also learn to love and we have a lot of fun all in the mix … there’s a lot. There’s a lot of tears; there’s a lot of laughs; there’s a lot, of a lot! There’s a lot going on!”

“The Real Housewives of Potomac” airs Sundays at 8 p.m. ET on Bravo.