Karen Huger on BravoCon, ‘betrayal, mess and fun’ of ‘RHOP’ season 7 and more

The seventh season of "The Real Housewives of Potomac" is currently airing Sundays on Bravo.

As theGrio previously reported, last month Bravo celebrated its second BravoCon, a massive fan event at the Jacob K. Javits Convention Center in New York City, that brought together over 100 “Bravolebrities” under one roof. With a fully packed panel, photo-ops and more, the women of “Potomac” felt in many ways like the belles of the ball, something that was a long time coming for the series.

While it did not start out that way, “Potomac” has slowly become one of the most successful and beloved “Real Housewives” shows on the network, and BravoCon was a perfect opportunity to thank the fans for their loyal support, Huger explained to us.

“It was a wonderful opportunity to just meet the fans and just give some of the love back that they’ve given me for the last seven years,” she said. “I have always known and felt that this [show] was going to be a hit. These girls are dynamic and we, together, are huge personalities and when you put all of that together, that is a recipe for successful reality TV.”

“The Real Housewives of Potomac” also makes history with four “OG” housewives (Huger, Gizelle Bryant, Robyn Dixon and Ashley Darby) from the first season still standing strong as full-time members of the cast, something Huger credits to the show’s success and the real relationships these women have with each other.

“It’s an honor and it’s a wonderful connection when you start filming each season knowing that your sisters, four OGs, are still there beside you, because you know these women,” she explained. “Mind you, we don’t always agree on everything and we keep it real about that too, but it is a huge, huge success story when we can last seven years. That’s a chemistry that’s unbeatable.” 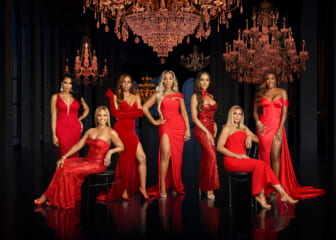 “Many things that I’m watching, I’m watching with the viewer,” Huger quipped. “So when I hear what [the women] have to say about me, trust and believe I am ready for the couch and the interviews…go ahead, ask me anything!”

With such a massive pool of talent, Bravo has also begun producing “The Real Housewives Ultimate Girls Trip” which brings together various housewives from different cities for one fabulous (and often drama-filled) vacation. While Huger’s castmates Bryant and Dillard Bassett wrapped up the third season of “RHUGT” on a trip to Thailand, when asked, Huger had two housewives in mind she would want to embark on the journey with, should she do the show. 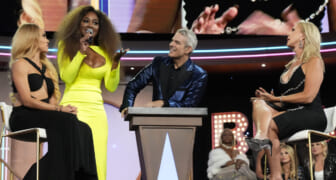 “I want Garcelle [Beauvais] with me,” Huger gushed when speaking of the “Real Housewife” from Beverly Hills. “She’s sharp and she’s funny, and she’ll hold us accountable and I’m normally the one holding us accountable in this group! So Garcelle can take that and I can be a little messier.”

As for her second choice, Huger has her eyes on one of the “peaches” from “The Real Housewives of Atlanta,” Drew Sidora, who just finished her second season. “Drew is funny,” Huger said. “Drew is on fire now! Drew is past that rookie phase and I’m like, ‘OK, I want to see where this star goes!’ I would love that combination of our personalities together.”

“The Real Housewives of Potomac” airs Sundays at 8 p.m. ET on Bravo.