Adapted from the 1976 novel of the same name, it has enjoyed critical acclaim for its execution, themes and tweaks to the original story.

As hypnotizing as ever, Anne Rice’s “Interview With The Vampire” is back. It is also Black, queer and airing as an AMC television series. With critical acclaim and an excited fan response, the new series tweaks the original story just enough, expanding the scope of the tragic vampire, Louis de Pointe du Lac’s history, shifting his origins from white plantation owner to affluent Black man in New Orleans of the early 1900s.

Days before Sunday’s finale, theGrio sat down with the series lead Jacob Anderson, diving deep into the lush new series, into how it works as an adaptation of Rice’s classic novel, how making Louis a Black queer man only deepens the character’s essence and what he hopes for his character as the series continues.

Described as a “magnificent, compulsively readable thriller,” Anne Rice’s 1976 novel is considered a staple in vampire-related literature and popular culture. The novel was adapted into a 1994 film starring Tom Cruise and Brad Pitt, but the series from Rolin Jones has more hours to tell Rice’s dense, decades-long, globe-trotting story. Anderson, who fans may remember for his role of Grey Worm in “Game of Thrones,” was familiar with the film. However, he was re-introduced to the story by reading the pilot.

“I felt almost confronted by [the pilot]. I felt like, ‘Oh, this is tapping into something really familiar for me’,” he explained. “I had to put it down for a bit … it’s the best script I’ve ever read. That pilot episode is incredible and there are things we had to lose from it as well and I still think the revised version of it is also brilliant.”

The pilot certainly does impress, telling the familiar beginnings of Louis’ tale, but unlike any version fans of the novel have seen before. This new interpretation of Louis’ story is rich with culture, the setting of 1910 New Orleans serving as a backdrop. As a Black, closeted queer man, Louis is swept up in his loneliness  — his desire for love and true faith in humanity only deepening and strengthening him as a character.

“I read the first two books and I think Anne Rice’s way of talking about these characters are so human,” Anderson noted. “It’s very, very deeply felt … it’s all about the sensations of being a human that struggles with themselves or asks questions about themselves and their footprint about the world around them.”

Just like Rice’s story, the central plot of the novel focuses on Louis’ young life as a vampire and his relationship to his sire, Lestat de Lioncourt (Sam Reid). The novel certainly contains homosexual undertones and the nature of their relationship sits in a grey area, but the series is much more explicit: Louis and Lestat are lovers, an interracial gay couple in 1910 America. Their relationship is just as toxic and volatile as it is in the book and this added distinction only deepens the characters, the worlds they inhabit and how they interact with each other. 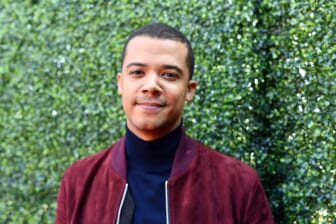 Anderson found the material to be “very refreshing, special and rare” in regard to the “color-conscious” casting of his character rather than “color-blind” casting. “I think there was something very true to me about those feelings of helplessness and powerlessness and what that can drive you to,” he disclosed. “It felt like an even more truthful conclusion, particularly as it pertains to how his power as a vampire does not buy him out of people’s perception of him as a Black man.”

Sunday’s season finale of “Interview With The Vampire” ended on an exciting (and shocking) note. It has been renewed for a second season and Anderson hopes that Louis will make one intentional decision. “I want him to find therapy. I want him to engage in therapeutic thinking.”

Anderson continued, “I would love for Louis to not put all of his stock in his romantic relationships  — as important as they are — I want him to like really connect to who he is. I think so much of his torment is about the fact that he never was given or never gave himself the opportunity to sort of reconcile with the truth about himself. He was always trying to be somebody else. He was always having to perform or kind of code switch between these different parts of society that he had to be a part of every day.”

Anderson is aware that there might not be a lot of interest in such minutiae, yet it is on his wishlist. “That might not make for dramatic storytelling or maybe nobody else wants to see that!,” he conceded. “But for me as somebody that loves him and he finds a version of that in the books … He goes back to New Orleans. He has this house and he sits in his garden and he does gardening at night and he reads his books. I would love that for him, as sort of un-dynamic and dramatic as that might be dramaturgically. I want that for him.”

The entire first season of “Interview with the Vampire” is currently streaming on AMC+ and Amazon Prime.