Maya Rudolph and Amy Adams on ‘Disenchanted,’ life after ‘happily ever after’ and more

“Enchanted” fans, rejoice! Fifteen years after the film captured audiences and introduced them to Princess Giselle, an official sequel to the Disney classic, “Disenchanted,” has hit Disney+. This time, there are new additions such as Maya Rudolph and Yvette Nicole Brown who join franchise mainstays Amy Adams, Patrick Dempsey, Idina Menzel and James Marsden.

TheGrio caught up with Rudolph, who gets to flex her comedy chops as the villain Malvina Monroe, Adams, who returns as Princess Giselle as well as newbie Gabriella Baldacchino, who takes on the role of Giselle’s stepdaughter Morgan.

The three dove into their experience shooting the live-action musical and their take on the themes presented in the film such as tackling parenthood, dreams and what happens after “happily ever after.”

Like the first film, “Disenchanted” is a self-aware, live-action fairy tale that allows the viewer to not only follow along for a thrilling familiar story, but also to dissect what makes these stories so timeless. “It’s such a smart and great way to look at it, and then genuinely exciting, because it is a fairy tale,” Rudolph added. “On top of it talking about it being conscious that it is a fairy tale, it also is a fairy tale!” 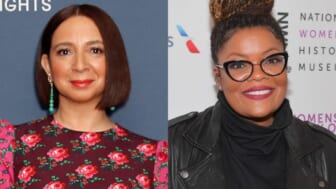 Baldacchino waxed philosophical about the film. “I think there is this big lesson on accepting change and embracing change,” she said. “‘Happily ever after’ means something different for everyone and just because it was ‘happily ever after’ doesn’t mean it’s gonna stay that same way and you just have to let life happen.”

Adams concurred with Baldacchino about the “happily …” aspect but also believes in an expansive notion of this theme. “Sort of thinking of ‘happily ever after’ as a destination or a singular moment … embracing that is such a bigger picture than that,” she noted. “It comes with ups and downs and challenges and it really is what you make of it, how you allow the people around you to bloom into who they’re supposed to be. I think the movie really talks about that.”

“Disenchanted” is currently streaming on Disney Plus.