The media mogul was honored with the Icon Award at the inaugural ceremony.

Tyler Perry is going nonstop! The entertainment mogul earned some serious flowers at the inaugural “Byron Allen Presents theGrio Awards” ceremony. He was honored with the Icon Award, which celebrated all the work he has done and the roads he has paved throughout the entertainment industry.

At the star-studded ceremony at the Beverly Hilton Hotel, Perry spoke with theGrio, reflecting on his career thus far, what being theGrio’s Icon Award recipient means to him and even teasing some of his upcoming projects, including one centered around Black women.

During his acceptance speech, Tyler Perry lifted up the Black women in his life and in the room, explaining to theGrio the depth of their influence. “I wouldn’t be here without my mother and the women in my neighborhood,” he said. “You know, I wish I could say all the men in the neighborhood were there for me. But it was the Black women who corrected me, who made me strong, told me to stand up straight, who when I did something wrong, popped me upside the head. You know, they showed me love and encouragement and kindness — my place.”

Perry added, “You can’t talk about my story and try to eliminate the power of Black women standing with me.”

Black women’s influence on his life is so profound that his next project will center on them. “I am working on a movie right now. I went and visited a few women who have an incredible story. They’re all over 100 years old. And the stories they told me were just fascinating. I can’t wait to tell the story. So that’s what’s going on there.” 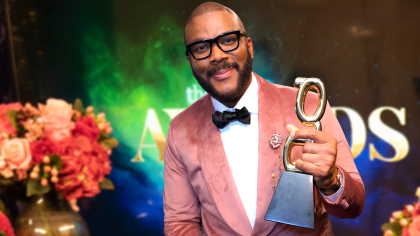 Finally, Tyler Perry expressed his gratitude to Byron Allen (CEO of Allen Media Group, which owns theGrio), calling the relationship they have forged together a “powerful” one.

“I just want to say how grateful I am for this honor and for Byron Allen,” he said. “I don’t know if people really fully get who this man is and what he’s been able to do. I look for people in this business that I can go back and forth and have conversations with. And for him, the level of understanding and business and fight that he has in him is so powerful and so many people need to understand that.”