OPINION: The former NFL quarterback won't be remembered for his playing career. He’ll be remembered as a soldier for social justice, an athlete whose inspiring and iconic gesture will last forever.

Deron Snyder   |
Colin Kaepernick participates in a throwing exhibition during half time of the Michigan spring football game at Michigan Stadium on April 2, 2022 in Ann Arbor, Michigan. (Photo by Jaime Crawford/Getty Images)

While scrolling through social media recently, I came across a post that led to a spontaneous decision. I was seated at Howard University hours later, enjoying a screening and discussion of “Kaepernick & America.”

We haven’t heard much about Colin Kaepernick since he blew off the NFL’s charade of a tryout three years ago. The Las Vegas Raiders didn’t sign him after a May workout. Despite his lack of job offers, I’m convinced you can’t list 64 NFL quarterbacks — starters and backups — who are better.

He hasn’t played since 2016 and seems unlikely to ever suit up again. But his career won’t be defined by six years with the San Francisco 49ers and leading them to the Super Bowl. He’ll be remembered as a soldier for social justice, an athlete whose inspiring and iconic gesture will last forever. 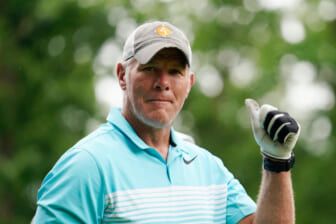 Also Read:
It’s understandable to think Brett Favre is getting a pass from the media

Kap exercised his by taking a knee on the sideline.

Our grandkids will tell their kids about him. That’s why everyone filed into the screening hosted by the Department of Media, Journalism and Film. “Most students in the audience tonight were like in middle school or high school when Kap did this,” Steve Wyche said afterward. He’s the NFL Network reporter who broke the story of Kaepernick not standing for the national anthem. A Howard alum, he’s also a prominent voice in the documentary.

Wyche noted that many students were in college when Ahmaud Arbery and George Floyd were murdered. They didn’t miss the juxtaposition of a violent knee in May 2020, and Kaepernick’s peaceful act a few years earlier. Content creators flooded the ‘net with images of the QB and killer cop, side-by-side in the same posture. The actions were wildly different, as were the responses.

“Kap’s stand impacted some of the reaction we were seeing (in 2020),” Wyche said. “It helped shape some of our memories and perspectives.

We knew the NFL was racist long before it blackballed Kap, just like Derek Chauvin didn’t prove anything new about America. It’s as plain to see as Jerry Jones in a 65-year-old photograph. There’s never been a shortage of evidence and new exhibits arrive regularly. Kaepernick provides an atypical lens as activist: a star quarterback and Black man adopted and raised by white parents, in a predominantly white community.

“We looked at Colin’s circumstance, certainly wonderful and incredible,” producer Bill Stephney said. “But he grows up in a very different situation than many of his colleagues in the NFL — those coming from Alabama, Georgia, south Florida and the Carolinas — with those players having their own interactions with law enforcement that at times can be contentious.”

In that sense, Stephney compares Kap to Spike Lee’s character in “Do the Right Thing.” “Mookie winds up being the most unlikely guy in the cast of characters to essentially precipitate and instigate a race riot over law enforcement excess and abuse,” Stephney said.

A theme throughout the film is the media’s failure to report the “why” behind Kap taking a knee. Instead, they focus on the “what,” allowing his action to be misconstrued as unpatriotic and insulting to the military. HU professor Jennifer Thomas, adviser to the school’s National Association of Black Journalists chapter, said the story is instructive for all budding reporters and editors.

“We talk about these kinds of events, how his protest led to such a big movement,” she said. “We tell them journalism is the first rough draft of history, and they have a role in sharing the impact of movements and protests. That’s important to know, especially in this era. It calls for a deeper conversation about the whole notion of objectivity and reporting.”

In the film, Wyche shares the locker room conversation he and Kap had immediately before filing his story in 2016. “I said, ‘Look man, I saw you didn’t stand up for the national anthem. Is there something to that?’ He said yes. I asked if he understood what could happen and brought up Mahmoud Abdul-Rauf. The blowback is significant. Any time you tread on that flag, it hits a certain segment of Americana in a way that is painful.” 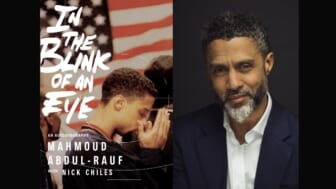 Wyche felt like a father talking to his son. But something else, too, “like a Black man speaking to a Black man who’s got more guts than me.”

More guts than most of us, which “Kaepernick & America” doesn’t let you forget. “It stimulates conversation and folks chopping it up, back and forth, about a lot of critical issues,” Stephney said, listing civil rights, law enforcement procedures, free speech, sports, the business of sports, and celebrity.

“All of these things we’re able to touch upon by virtue of this young man taking a knee.”

It pays to get off the couch.