When Cherelle Griner addressed the nation Thursday morning just moments after President Joe Biden announced that her wife, WNBA star Brittney Griner, was free after 10 months in Russian custody, Cherelle acknowledged that there were “so many hands involved” in the fight to bring her home.

While the work of the Biden-Harris administration ultimately led to the successful release of Griner, who the U.S. State Department consistently said was wrongfully detained, advocacy groups and activists were also instrumental in keeping the public attention on her case.

A host of advocates worked both in front and behind the scenes to ensure that the federal government was doing all it could to negotiate Griner’s freedom, from former Mexico Gov. Bill Richardson, whom Cherelle personally thanked in her White House remarks, to civil rights leaders like Al Sharpton and William Barber.

Griner, who is both Black and queer, also had the support of Black and LGBTQ+ organizations, including the Human Rights Campaign, the largest LGBTQ+ advocacy group in the nation. Its new president, Kelley Robinson, tells theGrio that the work of organizations like HRC had a “huge impact” on Griner’s return home. 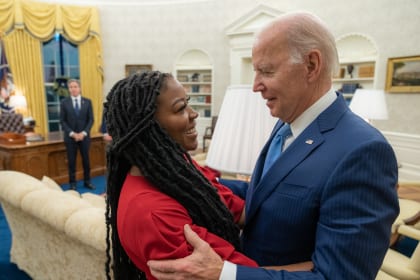 “The government, people in power, don’t do anything unless we push them to do so,” says Robinson, the first Black queer woman to lead HRC. “We came together with allies from across the progressive movement, with community leaders and activists, because people saw themselves in Brittney Griner in an important way.”

She added, “I think that pressure coming from the people meant that the government had to do the same. So I’m really proud of the way that we fought, the way that we didn’t give up, and that now we’re seeing something hopeful come out the other side.”

When asked during a Thursday press briefing if Black and LGBTQ+ communities had any impact in Griner’s release from Russia, White House press secretary Karine Jean-Pierre told theGrio, “Does that matter? Of course, that matters.”

Jean-Pierre added, “But I want to be very clear as well: The President has been committed to this.”

Robinson commended the Biden-Harris administration, who she said, along with advocacy groups, “didn’t give up.”

But while the White House, and the Black and LGBTQ+ communities, celebrate the release of Brittney Griner, others have criticized the Biden administration for the prisoner swap that led to Griner’s return. 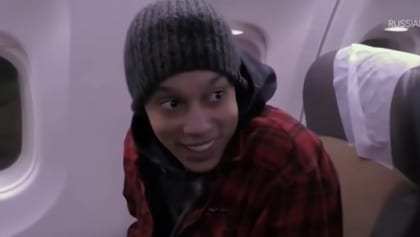 Conservative figures slammed the White House for securing Griner’s release and not Paul Whelan, another American citizen who remains in Russian custody. Former President Donald Trump called Griner “unpatriotic,” seemingly referring to the basketball star’s past protest of the national anthem over the death of Breonna Taylor. And Fox News host Tucker Carlson accused the White House of prioritizing Griner because she was a Black lesbian.

Robinson dismissed criticisms of Brittney Griner’s prisoner swap, and that, as Americans, “we need to be celebrating the fact that this person, this woman, is home with her family right now. That’s what we need to be focused on and think about what [she] and her family needs to get whole again.”

She continued, “Spending nearly 300 days in an unlawful and unjustified detention is outrageous and egregious. If we’re a country that stands up and stands for every single American, everyone looking at this should be enraged.”

Robinson said if anything should be critiqued about Griner’s detainment, it should be “about why this happened.”

“The LGBTQ community and Black communities are uniquely attacked, to the fact that women basketball players aren’t given the pay that they deserve. And that’s why she had to play in Russia,” she explained. “There are so many layers to this for us to critique and unpack for her – being brought home is definitely not one of them.”

Criticisms aside, Keisha Lance Bottoms, a senior advisor to Biden and director of the White House office of public engagement, tells theGrio that Griner’s return is a direct result of Biden keeping his promise to bring her home.

“I hope that people will be as vocal in giving him kudos for bringing Brittney Griner home as people were when they were critical that he didn’t care,” Lance Bottoms said. “The president said Brittney matters, and he would do everything in his power to bring her home, that he would not rest until she was home.”

She added, “When the president of the United States gives his word to the African-American community, to the LGBTQ community, to people across this country, and he says, I’m going to do what I can to help you, then that matters.”