How these Black families celebrate Kwanzaa in different ways

Every year, from Dec. 26 through Jan. 1, millions of Black people across the United States and parts of the African diaspora observe Kwanzaa — a celebration of family, community and culture. Born in the midst of the Black Power movement of the 1960s, Kwanzaa is a weeklong holiday of a cultural rather than religious nature. And while the holiday has core principles, values and symbols, families have formed their own traditions and rituals around Kwanzaa.

Maulana Karenga, an Africana Studies professor, founded Kwanzaa in 1966 in the wake of the Watts uprising. The word “Kwanzaa” comes from the Swahili phrase matunda ya kwanza, or “first fruits of the harvest.” The celebration reflects the harvest festivals of people on the African continent. 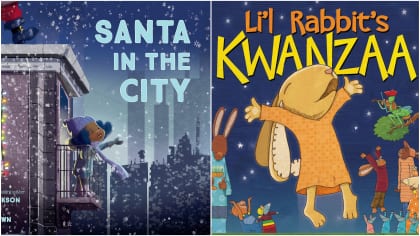 Also Read:
From Black Santa to Kwanzaa: 10 kids books to read or gift this holiday season

“As a pan-African holiday with ancient agricultural origins, Kwanzaa celebrates the good of the earth and carries within it a commitment to protect, preserve and share this good. And Kwanzaa’s modern origins in the Black Freedom Movement commits it to the achievement of liberation and social justice,” Dr. Karenga said.

Kwanzaa festivities center around the Nguzo Saba, or the Seven Principles, which in Swahili are: Umoja (Unity), Kujichagulia (Self-Determination), Ujima (Collective Work and Responsibility), Ujamaa (Cooperative Economics), Nia (Purpose), Kuumba (Creativity) and lmani (Faith). Each of the seven candles — three red, one black and three green — in the kinara represents a separate principle. “Participants also celebrate with feasts (karamu), music, dance, poetry, narratives and end the holiday with a day dedicated to reflection and recommitment to The Seven Principles and other central cultural values,” Dr. Karenga also noted.

Rev. Mark Thompson — also known as Matsimela Mapfumo — is a Black father based in New York who is the host of the “Make It Plain” podcast. Thompson is also a political, civil and human rights activist and organizer, an ordained minister, served as the emcee for the Million Man March and was the founding chair of the Umoja Party — a Black independent political party in Washington, D.C. Thompson speaks about the practical application of the Nguzo Saba to daily life. “Kwanzaa level sets African-American families seeking to reconnect to our original culture. If we don’t know about culture, Kwanzaa educates us. If we forget our culture, Kwanzaa reminds us. Kwanzaa isn’t going anywhere!” Thompson told theGrio.

According to Deborah Abdus-Saboor, Kwanzaa is among the best times of the year. “Kwanzaa is when family comes together. We talk together, we talk about improving our lives. It’s a wonderful time. Our grandchildren love it,” she said.

A resident of Cheltenham in the Philadelphia area, Abdus-Saboor looked forward to celebrating in person with the family. “We were doing Kwanzaa virtual because of COVID. I ordered the books we would read at home, seven children and 22 grandchildren. I made sure everybody had the kinaras. This is the first time we’re together. We’re going to read Nikki Giovanni, Maya Angelou and then we’re going to do dancing and games, do ‘Lift Every Voice and Sing,’ and read poetry” she said.

“I’m so blessed I had a mother who taught me about Kwanzaa,” Abdus-Saboor said, reflecting on her introduction to the holiday in the 1970s when she and her family had “the most positive, joyous happy time.” As the years passed by, Kwanzaa became distant, but then returned to her.

“Somehow I got disconnected, and maybe 20 years later I picked it up on my own,” she said. “An African American store had the kinara, and the kikombe cha umoja (unity) cup. I picked it up and said we’re going to do Kwanzaa again. You can drift away, and God will align you with something you used to do.”

As she prepared for the season’s festivities, Abdus-Saboor emphasized the importance of how Kwanzaa connects us to the past and to the ancestors. “Yesterday we were decorating and putting up our ‘Happy Kwanzaa’ signs. The children love it. We read the Nguzo Saba, the Seven Principles. On the sixth day, we invite all the family over. We read and celebrate, talk about endeavors for the future. It is an African American holiday and not a religious holiday. We acknowledge the ancestors, and each of us calls out an ancestor that means so much to us, and it makes us feel complete.”

Among the Kwanzaa traditions in the Abdus-Saboor family is the reading of the book and her family views the film, “The Black Candle: A Kwanzaa Celebration,” a documentary on the Black experience by M.K. Asante Jr., narrated by Maya Angelou. The family will reenact figures from Black history, and read stories from the book. “We start off with Umoja, and we start out with the Sheyann Webb story. The second day we read Wilma Rudolph. Even though she was a sickly child she was determined….The third day is Ujima. We read the Ida B. Wells story.” 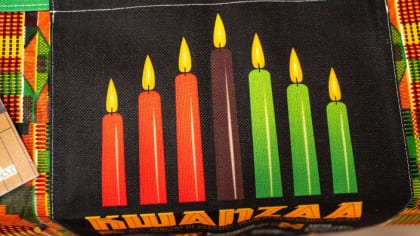 Now more than ever, the Black community finds meaning and purpose in Kwanzaa, “at a time when humanity and the world are in crisis” as Dr. Karenga said, reflecting on the erosion of democracy and environmental degradation, pandemics, global conflict and mass suffering.

“We’re not going to stop doing Kwanzaa. With all the senseless killing, I think it is important to teach kids about Kwanzaa,” Abdus-Saboor said of the challenges and violence facing the community.

Jasmine Banks, co-founder of the “Parenting is Political” podcast, first learned about Kwanzaa in elementary school and said she started celebrating in high school. “Kwanzaa has been a unique way to acknowledge my connection and solidarity in the Black struggle for liberation. It also has been a portal for the love and celebration of my Blackness and the power of pan-African connection and tradition,” Banks told theGrio.

“We celebrate Kwanzaa by calling our family together, cooking a meal. Oftentimes if there are non-Black folks, we will watch ‘The Black Candle.’ We also practice sharing parts of our culture with our neighbors and setting intentions for how we will focus on freedom struggles until the next Kwanzaa.”

“I’m drawn to Kwanzaa because I think the values are so beautiful. Anything with candles is a beautiful ritual. We don’t do it full out, but we talk about family values and what we should do for each value,” said Dina Stonberg of Wallingford, Pennsylvania. Stonberg, whose husband Rich and adopted daughter Miriam are Black, is white and Jewish. “I’m very much the culture keeper in the family for Judaism and interestingly Blackness and African-American customs. I serve on the board of the NAACP, mostly because I love to do it. Most of my friends’ group are Black women,” she told theGrio.

“We do our best to do Kwanzaa, and we are more successful some years than others,” Stonberg added. “Miriam’s godmother — who moved to the Newark, Delaware, area — we do activities with the kids. We light the candles together and go to the African American Museum (in Philadelphia) where they have wonderful stuff for the kids.”

Stonberg points to her daughter as the motivation behind their family celebrating Kwanzaa. “I want to give her the most beautiful, enriching experience. And Miriam…her racial identity is very secure — from a pretty young age. … She gets it and feels very strongly.”

Like Christmas, Kwanzaa and Hanukkah fall in the same winter solstice season and often coincide or overlap. Stonberg’s family celebrates both holidays, both of which have candles (Kwanzaa has a kinara with seven candles, while Hanukkah has a menorah with eight candles). “The one thing about Kwanzaa that is very hard for me to do is to blow out candles. As Jews, we never blow out candles. That is really challenging for me,” she said.

Another important aspect of Kwanzaa for many families is the feast, the Kwanzaa Karamu. Agriculture is a fundamental part of the holiday, and food is an important part of African and African-American culture. Food is shared, and Kwanzaa is about community.

“We’re really big here when it comes to Kwanzaa,” said Abdus-Saboor. “We make jollof rice. I try to incorporate a lot of African dishes. This year, I want to pay homage to our ancestors here. We’ll have fried chicken, black-eyed peas and rice, collard greens, sweet potatoes, greens and cornbread but we’re going to incorporate the jollof rice,” she said. “We will be having sweet potato pie and fruit salad for dessert.”

Kwanzaa is a “product of creative cultural synthesis,” and a commemoration of the past and of the ancestors. And as Dr. Karenga says, the holiday “unites the community in a solidarity of past, present and future generations.”

“Would you take millions of dollars or go back in the past? I said I’d go back to the past, teach my children things. I would never take the million dollars. A lot of people place value on money, but I place value on human beings and family and teaching, which is so important,” Abdus-Saboor said.

“It’s important because it teaches the family about unity and sticking together, how we can do better by remembering the past and moving forward.”